DOWNLOAD: The Stepkids - "Legend In My Own Mind" (MP3) 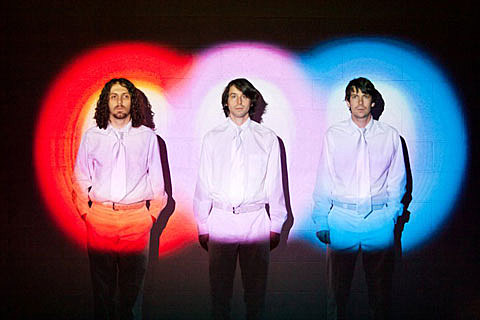 Linfinity, Waking Lights, and Sister Anne will take on Pianos TONIGHT (1/13), as part of a residency for Linfinity at the venue in January. One week later (1/20) Linfinity returns with The Stepkids & Robbers on High Street while the final week will include Contramono, Monuments and Actualities. Listed set times for each show are below. There are no advance tickets, and the 1/20 show is the only upcoming Stepkids appearance

The Stepkids, who recently wowed the crowd supporting Aloe Blacc at Le Poisson Rouge, are also Aloe's label-mate. Congrats to the Bridgeport, CT band for signing to Stones Throw Records.

Of course, an awful lot of work went into bringing the Bridgeport-based band to this point. Guitarist/singer Jeff Gitelman and bassist/singer Dan Edinberg's collaboration dates back to jazz gigs they played in high school. In adulthood, Gitelman's session work culminated with a stint as Alicia Keys' guitarist, while Edinberg toured with reggae-rock band ZOX. Joining forces again in 2008 with drummer/singer Tim Walsh -- a songwriter and recording engineer in his own right -- they worked together on, and ultimately created, an entire album.

To find their own distinct sound, they realized they had to embrace the sounds they'd tried to run from. "I couldn't dedicate my time to writing another R&B song," Gitelman explains in a recent phone conversation. "We never wanted to make a photocopy of an old Motown record. ... We wanted a collage -- make a photocopy and then scribble all over it."-[Fairfield County Weekly]

The Stepkids use classic 70s soul, funk, and psychedelia as a jump-off, but their unique cocktail will be on full display when Stones Throw releases their new LP in April. Check out "Legend In My Own Mind" which is downloadable above and streaming, along with some videos and all Linfinity dates, below...

The Stepkids - Legend In My Own Mind