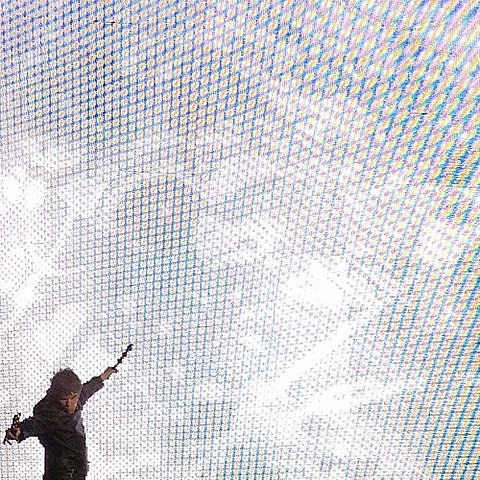 We just posted Blur news and while we're in a classic Britpop frame of mind we'd be remiss to not mention The Stone Roses who are back together and have been playing festivals and sending UK music press into a tizzy since May or so, which culminated in three hometown shows Manchester's Heaton Park over the weekend (June 29 - July 1). Here's a bit of The Guardian's review:

Burnished by the fact that they vanished just at the point in the mid-1990s when rock music became obsessed with nostalgia, their legend is based as much on what-ifs than it is on anything tangible. Their musical legacy consists of one astonishing album, played in its entirety here; one not-so astonishing album, which they skirt over in a couple of songs; and a handful of singles. Answering the what-if question is dangerous in the cold light of dusk on a damp June evening, 21 years after the event.

But that's what the impartial observer might think and impartial observers are notable by their absence at Heaton Park. Some sections of the music press and the tabloids have spent months carrying on as if the epoch-defining success of the Stone Roses' Manchester comeback was a forgone conclusion, which, with the best will in the world, seems fearless to the point of insanity. But the same attitude seems to be in abundance in a park packed with people who looked at Damien Hirst's demented recent assertion that the Stone Roses were "more important than Picasso" and nodded sagely, rather than burst out laughing.

They've come here to witness a heroic victory and there are moments when you get the feeling they aren't minded to let a trifling matter like the actual quality of the gig get in the way.

It feels cliched to bang on about the fact that Ian Brown can't sing; his voice can still stun you with its sheer inability to hold a tune, particularly in the company of such fantastic musicians.

John Squire's guitar playing is unremittingly great - he expands the motorik funk of Fools Gold into something vaguely resembling Led Zeppelin's Whole Lotta Love. Reni remains one of a handful of drummers who can play a solo you would happily listen to. But Brown's voice is painfully wayward during Elizabeth My Dear and Where Angels Play.

But, for most of the gig, his vocal shortcomings are a moot point: you can't hear him, because everyone is the crowd is bellowing every word, drowning him out. It would take an almost superhuman effort not to be carried along with the mood of euphoria during Made of Stone or Love Spreads.

There are some videos from the Heaton Park shows below. Clearly the fans were into it -- you can hear them sing along with the "I Wanna Be Adored" lead riff. Ian Brown's singing does leave a little to be desired.

There is talk of a new album too...if the band can manage to stay together. (A supposed onstage fight in Amsterdam a couple weeks ago turned to be a non-event.) The big question at this point is, will America get any shows? They were rumored for Coachella this year, which obviously didn't happen but Slicing Up Eyeballs points to a tweet from Last Broadcast which reads, "John Squire confirmed that ‪#thestoneroses‬ will visit the US "next year" ... any bets on Coachella??" Keep your fingers crossed.

Video from the Heaton Park Shows and 6/29 setlist are below along with a list of all current Stone Roses tour dates.

I Wanna Be Adored