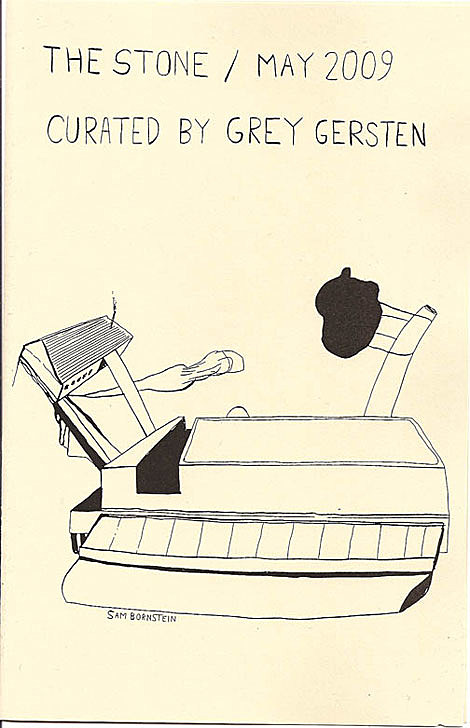 Musician and filmmaker Grey Gersten is curating the month of May at non-profit East Village space The Stone. Gersten is currently working on a new LP with Ches Smith (Xiu Xiu, Ceramic Dog, Secret Chiefs 3) and Kato Hideki (Death Ambient, Tremelo of Joy). His performances during the month with various performers are just some of the many worthy events scheduled.

A portion of Marc Ribot's 55th birthday celebration will happen at the venue on May 12th-14th. That includes a new addition to that weeklong series, "A Tribute to Ribot" - led by Gersten - on Wednesday, May 13th. That night is billed as, "Six colleagues, fans and cohorts of Marc Ribot pay tribute to the master in this special night of musical madness. Three performances per set feature music from several of Ribot's most beloved projects" Full info below.

Other acts that jump out include guitarist Loren Conners, who collaborated with Jim O'Rourke on 1997's Two Nice Catholic Boys, on Friday, May 1st; two performances by JG Thirlwell's Manorexia on May 6th; Lucky Dragons with special guests Ches Smith and Grey Gersten on Saturday, May 9th; and a pair of Sunday, May 10th shows with K Records artist Karl Blau playing an early set, followed by a late set from Wilco guitarist Nels Cline.

Select evenings in May will be broadcast live online on free103point9. Right now, scheduled broadcasts include Pauline Oliveros/Lucky Dragons on May 9thand Gersten/Crane/Sawyer and Bill Nace on May 22nd.

Full May calendar below...

May 2009 at the Stone curated by Grey Gersten

R. Nemo Hill presents: Active Ingredients at The Stone: ACTIVE O--program #4
IT'S THE MAN WITH THE DROP OF WINE ON HIS BROW
Monday May 4 2009 8PM
The Poetry of Robert Desnos read by Adriana Scopino & R. Nemo Hill

5/9 Saturday
8 pm
Lucky Dragons with special guests Ches Smith and Grey Gersten
Luke Fischbeck, Sarah Rara (instruments) Ches Smith (drums) Grey Gersten (guitar)
Lucky Dragons are about the birthing of new and temporary creatures--equal-power situations in which audience members cooperate amongst themselves. "make a baby" is the name for an ongoing series of performances in which sounds are generated by touching on the skin--at the heart of it is playing together, re-engaging the wonder and impossibility of technology.

10 pm
Pauline Oliveros
Pauline Oliveros (accordion)
Pauline has been playing the accordion since she was nine years old. Her work is legendary. Each performance is unique, drawing on the energies of audience and environment.

MARC RIBOT
55th BIRTHDAY CELEBRATION
Part of a week-long celebration taking place in venues around the city, the three days at the Stone presents some of Marc's most beloved and cutting edge projects.

5/14 Thursday
8 pm
Marc Ribot plays the works of Frantz Casseus with guitarist Marco Cappelli
Marc Ribot (guitar) Marco Cappelli (guitar)
The recordings of the works of Haiti's greatest composer for the classical guitar is Ribot's tribute to his late friend and guitar teacher, Frantz Casseus. Although the Villa Lobos and Haitian folk influenced style differs from that of his own compositions, Ribot's rendition remains true to the spirit of these beautiful, rhythmically delicate pieces.

5/16 Saturday
8 pm
Metal Mountains
Helen Rush (vocals, guitar) Samara Lubelski (violin, bass) Pat Gublar (guitar)
Metal Mountains--If you collected the 500 calmest, most beautiful, starkest, most minimalist records of the past century, you would have a seed which under the most fortuitous of circumstances might blossom into Metal Mountains. Back before the New Weird America was new, or weird (or even American) Helen Rush, Pat Gubler, Samara Lubelski, were turning on freakniks at Soho lofts and the Cooler (R.I.P.) to the tear-inducing gorgeousness of their haunted stylings in bands like The Tower Recordings and Hall of Fame. Listening to Metal Mountains is like staring at the stars on a cloudless night with Carl Sagan whispering in your ear. If you are not overwhelmed by a sense of the mystery and grandeur of the Universe, have your doctor lower your dosage. Five dollars.

10 pm
Steel City Boogie
Henry Flynt (guitar)
Henry Flynt, who has about twenty albums out of archived performances, returned to live performance in 2008 after a twenty-five year absence. For several performances in 2008, Henry Flynt appeared with his niece Libby Flynt. In the last 2008 performance in London, Henry appeared solo. When Henry and Libby began, the composition was entitled "Rockin' Midnight". The set is a long rock instrumental in which Flynt plays lead guitar against a tonic pedal-point rhythm track, mixing and matching styles. It ends with a coda alluding to Henry's earliest duet work with La Monte Young. Henry has updated his sound, using more effects than in his guitar work of the last century. It's all "raga rock," a hard-rock adaptation of the country selection "Lonesome Train Dreams" on his album "Graduation". At the Stone, Henry will appear solo. As the composition continues to evolve. Flynt is steering in the direction of funky country, and has changed the title accordingly "Steel City Boogie". Fifteen dollars.

5/20 Wednesday
8 pm
LA OTRACINA Presents "Purple Whales Of The Sun, Who Dareth To Swim Shall Drown In Thy Bliss"
Adam Kriney (drums, vocals) Evan Sobel (bass IV) Philippe Ortanez (electric guitar)
They is The Crystal Wizards Of The Cosmic Weird. An swirling epic ocean of progressive psychedelia swarming with pirates of proto-metal glory ravaged by sea-hag tunes of the eternal sludge doom and ascend upon thee, oh, brothers and sisters do not fear, a siren song of acidic jazz-rock will mellow out yer yellow. Five dollars.

10 pm
Matta Llama
Arik (bass) George (guitar) Phil (keys) Spencer (drums, vocals)
New York dwellers Matta Llama have been churning their potion for the past eight (or is it nine?) years, bubbling up sounds of instantaneous psych blurbs, false jazz intrusions and the freeing of forgotten spirits. Consisting of yer basic rock formation, guitar, bass, keys and drums, Matta Llama posit a challenge to modernity without guilt or sympathy toward the common ironics present in the shit-storm known as the aughts. A carrying, rolling sound that resounds in the round, yer mind. Five dollars.

5/24 Sunday
8 pm
The Jungle
Stephanie Barber
Sound, video, words, my body. My mouth. Many soft colorful fabric snakes. An unreliable narrator in a self imposed exile in the jungle--the sheer terror of thousands of square miles of rapid life and death, the superfluousness of this metaphor for existence--a questionable lecture on plant socio-emotionality--a symphony for this flora--a radio show which provides the courage and fortification of a direct god line to the jungle floor.

10 pm
J. Gräf Sheppard
Jenny Graf (voice)
J. Graf Sheppard has been an active participant in the international avante garde music scene since 1996. Building vivid, compelling soundworlds using the Tranoe (a Peter B. instrument in the ambrazier family), guitar and voice, her music as one half of Metalux and Harrius as well as her solo project J.Graf has bent the ears and minds of those who venture into her world.