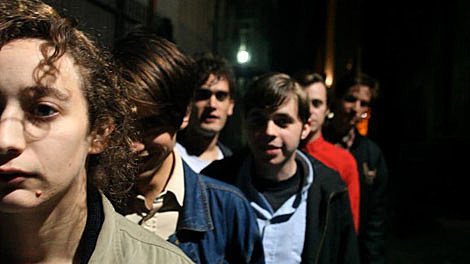 Mika Miko have three more shows, all in L.A., before they break up for good to concentrate on "returns to school, new projects, jobs and relationships." The other half of the story is that Mika Miko drummer Seth Densham and vocalist/sax player Jenna Thornhill-DeWitt (with a new name due her engagement to Cali Dewitt) are now full-time members of the Strange Boys. Both bands played FYF Fest in L.A. this September and Fun Fun Fun Fest in Austin this November. Videos from both are below.

Jenna has been playing with the Strange Boys for a while - when the bands toured together last summer she sat in for a song at both their Cake Shop and Market Hotel shows.

The updated Strange Boys are releasing a new record this February on In The Red (US) and Rough Trade (elsewhere). The album, Be Brave, was recorded in September 2009 and will be preceded by a limited edition 7" single of its title track on January 25th (UK) and 26th (US). The song is streaming on their MySpace, and played live, below.

The band heads out on a West Coast tour with Chain & The Gang (Ian Svenonius) this February, and play out-of-town shows up to SXSW, which takes over their hometown of Austin starting March 12th.