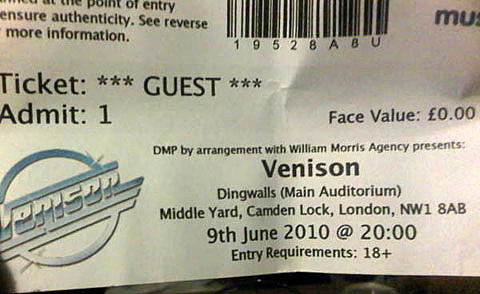 Appearing under the band name Venison, the [Strokes] played a greatest hits set to a crowd of less than 500 fans at Dingwalls.

Tickets for the gig, which sold out in seconds yesterday (June 8), were exchanging hands for up to £500 outside the venue before the gig. But despite plans to release a new album in 2011, the band witheld from playing any new material during the show.

Amid heightened expectation, The Strokes took to the stage shortly after 9.30pm and kicked off their set with 'New York City Cops'.

The track, from their 2001 debut album 'Is This It', prompted a huge crowd surge from the small crowd.

The band, who were clearly happy to be back together, exchanged smiles on stage before launching into 'The Modern Age'.[Gigwise]

The Strokes played their first show in four years last night (Wednesday, June 9th) at Dingwalls in the London neighborhood of Camden. They play their 2nd this weekend at the Isle of Wright Festival. Their first US show as of now is their competing slot with Lady Gaga at Lollapalooza.

Videos from the Venison show and the set list are below...

The Strokes - June 9th, 2010, in London set list (via)
New York City Cops
The Modern Age
Hard to Explain
Reptilia
Whatever Happened?
You Only Live Once
Soma
Vision of Division
I Can't Win
Is This It?
Someday
Red Light
Last Night
Under Control
12:51
Juicebox
Heart in a cage
Take It or Leave It