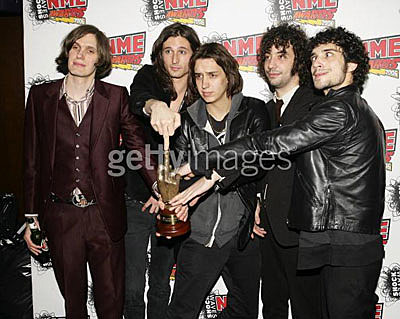 The Strokes finished up a three night run at Hammerstein Ballroom in NYC Saturday night (March 4, 2006).

"the strokes were sososososo amazing. kate and i got separated from everyone because we had MEZZANINE 2 tickets (the place for rejects), and it was actually heartbreaking and we almost started crying. we were so mad at hammerstein ballroom we went to the bathroom and destroyed the paper towel dispensers and stuff, which was sort of amusing." [valerie's livejournal]

"I thought they sucked the last few times I saw them on various late night shows, but damn, they put on one hell of a show last night. Spotted Chris Martin in the balcony seats." [Silly Pipe Dreams]