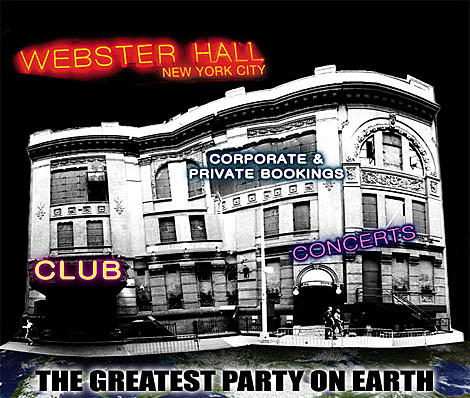 New York, NY - Webster Hall announces the addition of "The Studio @ Webster Hall" - a state-of-the-art recording studio built into the intimate 300 capacity room of this NYC Landmark venue. The Studio features an L'Acoustics sound system, stage lighting that will rival any large room in New York and the ability to record digital multi-track sound from the Grand Ballroom as well as The Studio. Select bands will be approached about recording their shows for the upcoming Live at Webster Hall Series which will be available on-line and at Best Buy.

Since the first show in 1886, Webster Hall has been an important mainstay in the live music community. Known for breaking new acts and hosting the industries top artists, this multi-level venue has always been the center of attention. The venue was designated an NYC Landmark in 2008 - nearly 125 years after the doors first opened.

As a visitor to The Studio you will have access to all four levels of Webster Hall on Thursday through Saturday nights at no additional cost. Resident DJs, late night comedy, weekly dance parties, record release shows and special unannounced acts are just a glimpse of what you will find at The Studio. You never know who you might see when the lineup says "special guests."

In addition to the hottest new acts, Webster Hall is also known as a club where established acts like to perform in an intimate setting. Some of these include Kings of Leon, Justice, Tiesto, Sasha, and Bloc Party.

"The Studio @ Webster Hall" will celebrate its' official opening on November 8th. However, you can get an early peek starting October 21st when the venue will open for the CMJ Preview week featuring performances by: Friendly Fires, Gang Gang Dance, Tigercity, Young Love, Jealous Girlfriends, Shout Out Out Out Out and many more! For this week only (October 21st - October 25th) entry is totally FREE for all shows!

The Studio will be open 7 nights a week from 7:30 pm - 4 am starting Tuesday October 21, 2008 and STAY TUNED for what's in store on November 8th - the official OPENING DAY!
For a full list of artists playing during CMJ, check out www.websterhall.com/thestudio