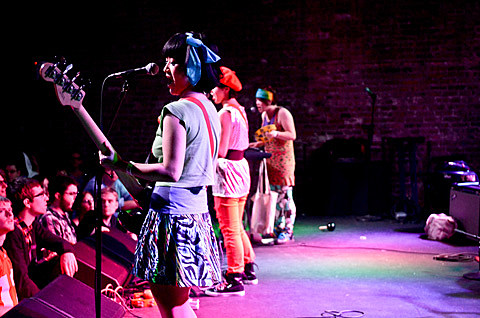 Unlike last year, I managed to make it through CMJ week without getting sick. Normally I try and do a sonic detox and not see any music after CMJ for at least a week. But that's not gonna happen as there's some seriously good stuff rolling through town in the next five days. Early next week too (Clinic/Fresh & Onlys), but let's not get ahead of ourselves too much.

Hey, remember Oh No Oh My? No? Oh. Well, people were going apeshit about them a few years ago. I kinda forgot about them, to the point where when I saw they were playing this week I thought it was Danish band Oh No Ono (editor's note: SAME). Anyway, Oh No Oh My are back!... and will release a new album of pleasant acousticy pop, People Problems, in early 2011. And they're here in NYC for a couple shows: tonight at the Rock Shop, and tomorrow (10/28) at Pianos.

More interesting to me are the bands they are playing with. Tonight at the Rock Shop, it's with Japanese bandThe Suzan whose new album Golden Week For The Poco Poco Beat was just released this week. It was produced by Bjorn Yttling of PB&J and you can definitely hear his touch on clever, catchy tracks like "Home" which you can download at the top of this post. Also playing are New Zealand's The Family Cactus.

The Pianos show has another New Zealand band,Street Chant, who were one of the funniest bands, stage-banter wise, I saw at CMJ. One memorable song intro: "We're the biggest rock band in New Zealand and this next song was Number One for nine months in a row!" Street Chant are pretty punk rock and definitely worth catching. Also playing the Pianos show: Boats (not Seattle's BOAT) and Estranged Estates.

The Intelligence @ Market Hotel in 2009 (more by Tim Griffin) 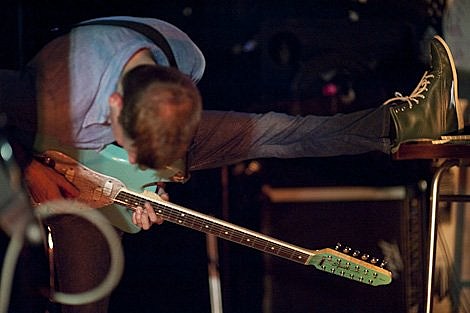 The Intelligence are visiting this weekend, playing Cake Shop on Saturday (10/30) and then the Todd P/Panache Halloween extravaganza on Sunday (10/31)at Ridgewood Masonic Temple . When it comes to surfy garage rock, The Intelligence are in the 99th percentile and if you haven't picked up the band's new album, Males, it's one of my favorites of the year. You can download a track from it above.

Further reading: Front dude Lars Finberg is keeping a tour diary for The Stranger and so far (one entry) it's a very entertaining read:

It's a 14-hour-plus drive to Fargo (basically 20 after my bathroom stops). We've learned to do this at the beginning of the tour as it can be so depressingly boring that all you can do is listen to Erik Satie and stare into the void. We finally stop around 2 am in Dickenson, North Dakota, and every hotel is booked for hunting season. I thought that the whole point of hunting was to drink the deer's blood and sleep under the stars in its carcass. It doesn't seem right to bag a deer and have a Rooty Tooty Fresh and Fruity breakfast and watch Becker in a warm bed at the Comfort Inn, so we drive on. Wait, there's a vacany sign--a true dump glowing like a beacon! "One room left," the clerk says. Highlights include two towels for five people (I am answered with a blank stare followed by a shrug when I ask if we can get more), a hornet in the room, and a shower curtain that emits such a powerful cigarette smell that I want to steal it to impress others.

The Cake Shop show is with Philly's An Albatross, plus locals German Measles and McDonalds; the Todd P Halloween show has Cassie and Justin from The Babies performing as The White Stripes, plus The Beets, Das Racist, Janka Nabay, Pictureplane and more. All upcoming Intelligence tour dates are at the bottom of this post. 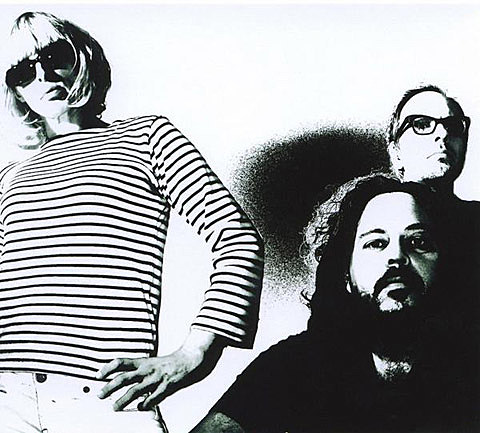 Visa issues kept Dutch band Bettie Serveert from playing Maxwell's and Southpaw earlier this month, but the band are here now, in the middle their North American tour that hits Bowery Ballroom on Friday (10/29), and Maxwell's a few days later. Their 1990 debut, Palomine, is one of my favorite Matador albums ever and they've consistently performed ever since. Pharmacy of Love is the band's ninth album and a little more rockin' than we've heard from the band over the last few LPs. Check out "Deny All" at the top of this post. Carol van Dyk's voice is still smoky cool, and catchy songs abound. And surely they'll play "Tomboy" and "Kid's Alright."

Opening are Elk City whose new album House of Tongues was kind of overlooked. Smart, well-arranged pop, with ex-Luna guitarist Sean Eden providing some shimmery flair. Download album track "Jerks on Ice" at the top of this post.

And finally, Austin's YellowFever are in town this weekend for a string of shows. Hopefully Jennifer made it through Airport security ok this time. They play tonight (10/27) at the Showpaper 42nd St. Gallery with The Babies, Sewn Leather and more. Then they play The Mug at Vassar College tomorrow (10/28), Dead Herring on Friday with Coasting, Julianna Barwick and more; and Saturday (10/30) at 171 Lombardy forThe Pelly Twins Halloween Party with DOM, Smith Westerns, Total Slacker and Sweet Bulbs.

Also, just in time for halloween, the spooky video for Total Slacker's "Crystal Necklace" which you can watch below.

That's the big stuff. A few more shows, day-by-day, not covered above.

JEFF the Brotherhood headline (!!!!!!) Music Hall of Williamsburg. This is insane to me but I always knew they had it in them. I'm sure they'll do their best to bring the Death by Audio spirit to the clean confines of MHOW, with some help from NinjaSonik, Liquor Store, Elks. Have you checked out their new track yet?

Eternal Summers play the Los Hermanos Tortilleria out by the Jefferson stop on the L. It's part of a continuing series presented by Newtown Radio.  Also playing Total Slacker offshoot Web Dating, plus Connor from The Drums is DJing.

Crystal Stilts, whose new single "Shake the Shackles," is downloadable at the top of this post, play The Rock Shop tonight with German Measles and The Mad Scene.

Mininal synth duo Xeno & Oaklander haul out their wierd, cool old gear for a show at the New Museum with No Fun Acid.

If you're going to see Frightened Rabbit at Terminal 5, do get there early to see The Phantom Band who were just awesome at our day party on Friday.

A Sunny Day in Glasgow have also added this:

Prospect Farm has almost completed its first season. You are invited to our Harvest Fest + Soup Cook-Off to be celebrated on October 30th (raindate October 31st) at the Prospect Farm from 11am to 4pm. Please save the date for this fun day of learning about the Prospect Farm's work, member info, games, music, food, soup cook-off judged for prizes, raffle, and more.

That's it for now. More dates, flyers and videos below... 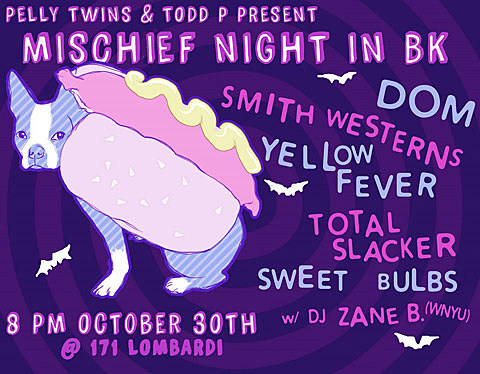 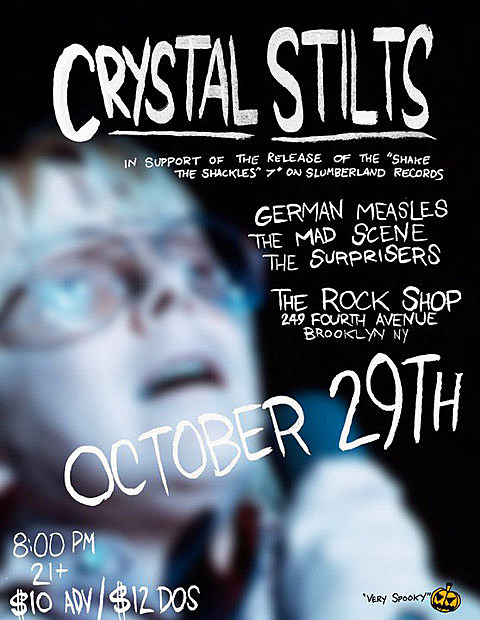 Allo Darlin - My Heart is a Drummer 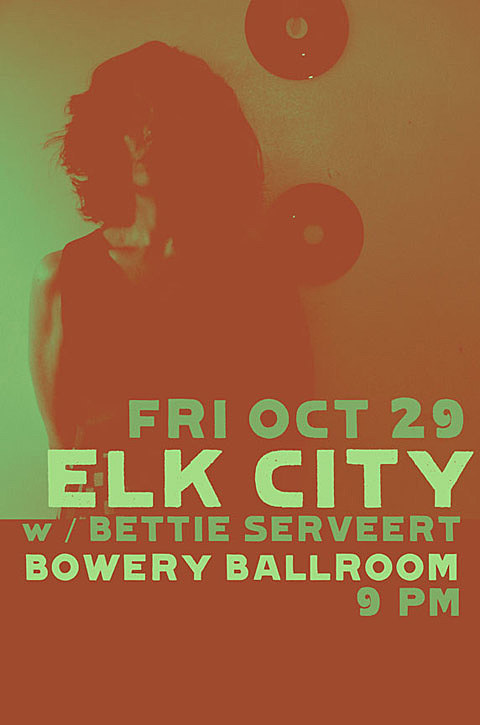 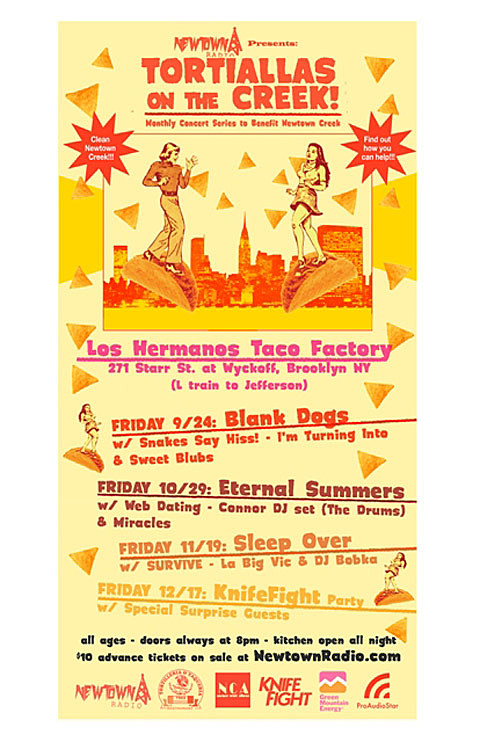