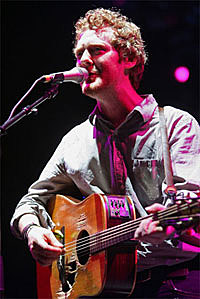 Sound seepage is a common problem at Coachella and Glen Hansard found himself in the thick of it when he started the Swell Season's outdoor stage set solo with just an acoustic guitar. Rock from the mainstage and beats from the tents gave him pause.
"How to be louder than the Raconteurs? You turn it up," he said midsong, and indeed the PA was boosted a good 20-30% louder. Thrilled when Jack White and company finished, he half joked " now all we've got to worry about is Aphex Twin."

Not only did Hansard, who won the best song Oscar this year with his partner Marketa Irglova, handle it all in stride, he turned the Swell Season set into a Coachella celebration. He recruited the National's drummer Bryan Devendorf and played covers of other acts' songs: in honor of meeting Kim Deal, she was here with the Breeders, Hansard and Irglova dueted on the Pixies "Cactus," and with the full band did an impressive version of Kraftwerk's "Model." [VARIETY]

The Swell Season are currently on tour and will play Radio City Music Hall in NYC on May 19th. It was also just announced that they're playing the Baltimore Virgin Festival in August. Right before Coachella they played Jimmy Kimmel. Videos from that and Coachella (and the latest tour dates) below.....