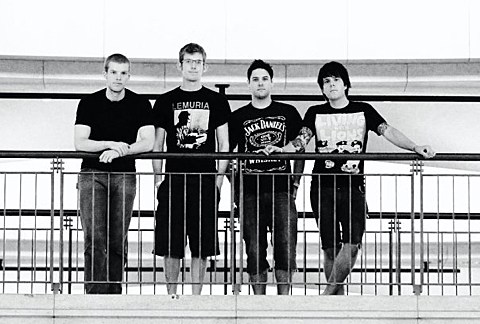 Flint, MI punks The Swellers are releasing a four-way split with Lobby Boxer, Hung Up and 1876 on May 20 via Save Your Generation Records. Their contribution is a cover of "Tales of Lolita" by sludge-pop masters Floor from their 2002 self-titled album. Their take doesn't differ too much from the original, but they do real justice to the track and nail those signature Floor harmonies. The track makes its premiere in this post, and you can listen below. Pre-orders are ongoing.

As you may know, the actual Floor are reunited and releasing a new LP, Oblation, next week (4/29) via Season of Mist. You've already heard four tracks from the album, and you can now stream Oblation in its entirety over at Pitchfork. They're also touring with Hot Victory and hitting NYC on May 5 at Saint Vitus (tickets) and Chaos In Tejas' Weekend in Austin (5/29 - 6/1).

Stream The Swellers' Floor cover below...

Split Tracklist:
Side A:
1. Hung Up - Here To Stay
2. The Swellers - Tales of Lolita (Floor Cover)

BONUS DIGITAL ONLY TRACKS:
The Revelry - House of Cards (DEMO)
FLOORPLAN - Whoever