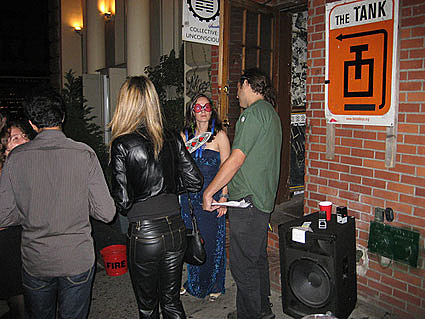 The Tank, a non-profit venue that has been providing a creative, collaborative home for emerging artists for the past five years, is about to need a new home of its own. But for this young company that moved 3 times in its first 3 years, this is familiar, if undesirable, territory.

Forced to leave its current home by July 31st, The Tank will continue presenting in this period of transition. But by August, this collective of performing arts and public affairs will move into a temporary space, while it searches for a more stable, long-term venue for 2009. As of now, neither the transitional venue nor the next home are determined.

Damage caused by massive plumbing problems, compounded by irreconcilable issues with the building's owner, has created a costly, unwelcome and untenable situation at 279 Church Street in Tribeca, where The Tank had made its home with the performing arts presenters Collective: Unconscious (C:U) since January, 2006. At this time, C:U also intends to continue presenting, although is unsure where.

After we lost our original home on 42nd Street, it wasn't clear if we'd survive the transition. But we've been on Church Street longer than we were on 42nd and "we not only survived, we expanded," explained Founder and Managing Director Mike Rosenthal, who has curated two of The Tank's most successful offerings: the annual Bent Festival of experimental music and Blip Festival of Game Boy generated music. "It's a shame to move so suddenly after all the work we've put into this space, but we need to feel our artists and audience are coming to a welcoming, healthy setting and we're going to make that true."

A home for theater, dance, mixed media, music, comedy, film, community events and public discussions, The Tank presents 300 events a year, welcoming over 10,000 audience members at capped, affordable ticket prices. Additionally, The Tank does not charge performers or presenters, making it a unique spot in Manhattan where artists can take risks without the prohibitive financial burden of most venues.

The Tank, which recently celebrated its 5th anniversary and received a Proclamation from City Council for its cultural contributions, ironically just hosted a public discussion on the challenges facing independent arts venues in New York. At a time when an increasing number of small venues have been closing, The Tank's ability to survive three moves, skyrocketing rent, floods, burglaries, blackouts and an IRS audit was cause for pride and even celebration.

When alternative comedy hub Mo Pitkins announced its closing last year, The Tank publicly invited any of its displaced shows to find a transitional home at The Tank. Now, in a role reversal, The Tank is looking to its friends and allies for leads on office space, storage, a multi-use performance area for the short-term, and the space and financial support for a more permanent home.

Every time we've had to move, we've found partners that have made it possible: Chashama, the Lower Manhattan Cultural Council, C:U. And we turn around and offer that support to others as often as we can, said Justin Krebs, Founder and Board President. "We all have to look out for each other if we want the independent arts venues and companies to survive", and I have no doubt we will make it work this time as well.