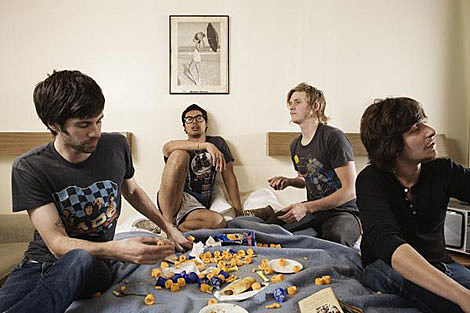 Melbourne, Australia's The Temper Trap are currently on their first big tour of the States, and will head into New York later this week for two shows during the CMJ fest: Thursday (10/22) at Music Hall of Williamsburg (tickets) and Friday (10/23) at Bowery Ballroom (tickets). Already huge in their own country, the band's debut album is currently in the UK Top 40 and their single "Sweet Disposition" (also featured in the 500 Days of Summer soundtrack) is just outside the UK Top 10. Their sound is stadium-ready (I'm talking U2 and Keane) but I do think they have some good songs. I especially like non-single "Down River" and there's no denying "Sweet Disposition" is catchy. So I wouldn't be surprised if the next time they hit town they skip straight to Terminal 5. We'll see.

The MHoW show is a pretty good show overall, where they play with three London bands: the folky, charming Mumford & Sons who were great at Cameo back in March; the underrated, hard-to-pigeonhole Golden Silvers, and Goldhawks who've toured with Temper Trap in the UK and have a somewhat similar sound.

A couple Temper Trap videos, plus tour dates, are below...

The Temper Trap - "The Science of Fear"