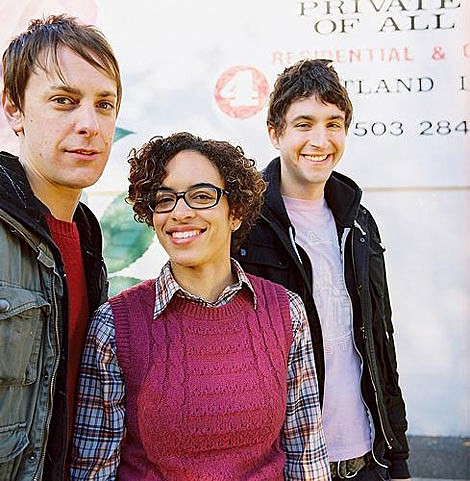 "...So much else is new and wonderful for us! We have a new record label, Kill Rock Stars. Not only has Kill Rock Stars released some of Portland's (and the Northwest's) best punk and indie records to date (Elliott Smith, Sleater-Kinney, The Gossip), but the label has recently relocated to Portland, and is quickly filling it's roster with even more great Portland bands (Shaky Hands, Panther, Horse Feathers). The Thermals are thrilled to now be a part of this family as well. We were thrilled to be part of the Sub Pop family for six years, but we felt it was time to move on. We turned down a second contract from Sub Pop, lest you think we were dropped! You don't drop us, we drop you. Not you, personally. We love you! Seriously, you're the best.

We have a new drummer as well. Westin Glass, formerly of Seattle's Say Hi, joins us (Kathy Foster and Hutch Harris) to complete the third (or so) live line-up of The Thermals. In addition to (again!) touring the UK with The Cribs this February, and playing multiple shows at SXSW in March, we will be touring the U.S. for two months, following the release of Now We Can See on April 7th. We'll be doing festivals in Europe and the U.S. all summer long, followed by a full European tour in the fall... - The Thermals

The Thermals are also playing a late show (11PM doors) at The Bell House in Brooklyn on January 31st before they go to Europe. $12 tickets go on sale this Tuesday at 3PM.

All Thermals dates below...