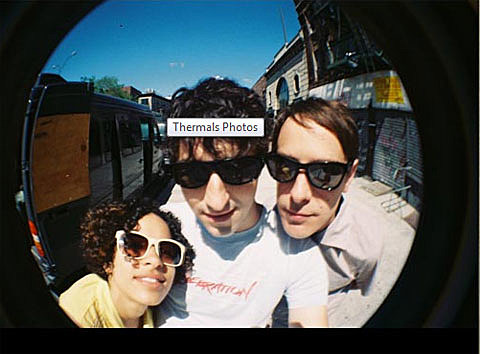 "Art is made up of moments. Moments of inspiration. Power. Emotion. Grace. Passion. These moments collided in Paris in 1911 and changed the path of art and conventional creativity. There will be another spectacular convergence exactly 100 years later.

Philadelphia, April 7, 2011 - May 1, 2011. Introducing the Philadelphia International Festival of the Arts.

Together we will create a city inspired, featuring artistic expression from across our region and around the world. And the world will be invited to join us in a new moment of innovation, collaboration and creativity."

Bands playing the Philly fest include Blitz the Ambassador, Sharon Jones & the Dap Kings, and The Thermals who play two hours before Sharon on the Pine Street Stage on April 30th.

The Philly show is currently scheduled as a one-off for the Portland band who will have finished a European tour eight days earlier and who don't start their tour with Matt & Kim until after Sasquatch at the end of May. That tour ends in Boston on 6/30, one day after they play a sold out show at Terminal 5. One day later, July 1st, the Thermals return to NYC to play their own headlining show at The Bell House. Tickets are on sale now.