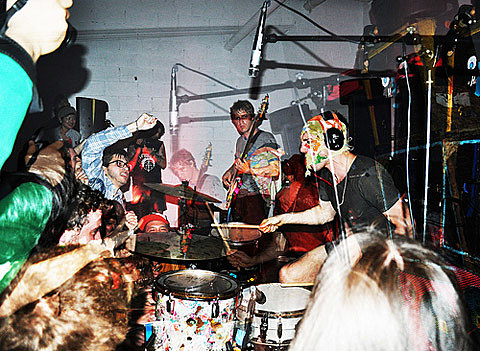 "Lightning Bolt pummeled the crowed at Le Poisson Rouge [Thursday] night with their standard blitzkrieg attack of sound. For over an hour the noise duo blasted away through classics from their excellent discography sending the crowd into a near frenzy. Brian Chippendale did his best impersonation of a jackhammer playing the drums and Brian Gibson stood by, ever so effortlessly, as he turned his amps up to 11 and ripped through distorted blasts of thundering bass. Despite the breaks between songs, the non stop bombardment of escalated sound sent shock waves through the crowd that more then likely split a few ear drums. The relentless assault proved that these two men are masters of their craft as they powered aware with such force and precision that kept the crowd screaming for an encore. When the band answered the call they came back to the stage and began to tear through the epic track "Ride the Skies" which nearly sent everyone over the edge after an already incredible performance of hurricane like forces of sound crushing the crowd." [omgnyc]

Lightning Bolt played Le Poisson Rouge Thursday night. It was one of two NYC dates the band played last week (they also played 285 Kent on 4/27, Wed), and the Providence duo will be back this week. NYU will host its annual Strawberry Festival (volunteer here) on Laguardia between West 3rd & 4th street on Friday May 6th with a special appearance from Lightning Bolt, as well as Pterodactyl, Ducktails, and The So So Glos. The fest goes down from 1PM until 5PM, and features food, drink, prizes, and even a DJ battle "with DJ Juan Farrakhan (BX) and DJ Jules Verne (BK, mem. FIASCO)." Unlike in years recent past, this year's event is advertised as "open to the public." More details are below.

In related news, soon after we posted about the May 5th Thermals show at Le Poisson Rouge, it was revealed that the show is actually an NYU show which would explain why advanced tickets were not easy to get. Note that "Advance tickets are only available for NYU. Non-nyu tickets available day of at doors." If you can get a ticket though, the show is a bargain: $7 for students, $10 for non-nyu, and both Twin Shadow and Tyvek were added to the very impressive Cinco de Mayo bill. Though:

IMPORTANT NOTE: those event times are NOT A MISPRINT. The doors for LPR will be open at 6, the first act goes on around 7, and this show WILL BE OVER AROUND 10. GET THERE EARLY.

NYU students can get tix at Ticket Central.

Twin Shadow meanwhile is out on tour with The Pains of Being Pure At Heart and will in fact open the May 6th show at Webster Hall. Tickets are still on sale. All TS dates are listed below.

The Thermals played Maxwell's with Dinowalrus last night (5/1), and in addition to the Le Poisson Rouge show, they're playing NYC at the Bell House in July after their tour with Matt & Kim. Tickets are still on sale.

This concert is FREE & open to the public, ALL AGES!