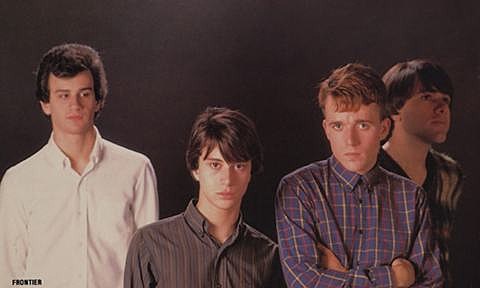 For me, the most suprising name on this year's Coachella line-up was The Three O'Clock. With farfisa-fueled songs like "With a Cantaloupe Girlfriend" and "Spun Gold," they were perhaps the quintessential band from LA's early-'80s "paisley underground" scene that included The Bangles, Rain Parade and The Dream Syndicate. After 1985's terrific Arrive Without Traveling, the band got swept out of mushroom tea-land and into the world of Bad '80s Production, leading to a deal with Prince's Paisley Park where they put out 1988's lackluster Vermillion before breaking up. But those early records are great and hold up quite well.

In addition to the 1983 live concert that Burger Records is putting out for Record Store Day 2013, we can look forward to The Hidden World Revealed, a new compilation of the band's early days on Frontier Records including tracks from when they were known as Salvation Army (the charitable organization forced them to change it). Ten of the 20 tracks are previously unreleased. (CD only, unfortunately, but their old vinyl isn't too hard to come by.) Tracklist is below.

Before Coachella (they play at 2:15 PDT on the Gobi Stage on both Sundays), the band warmed up with a show at the Glass House in Pomona, CA on April 6. They then played Conan on Wednesday night (4/10), doing "With a Cantaloupe Girlfriend." Video from that and the Glass House show are below.

With the new retrospective and live performances, maybe -- just maybe -- someone will coerce The Three O'Clock to head to the East Coast for some shows. Meanwhile, some classic Three O'Clock tracks are below as well.

The Three O'Clock - "With a Cantaloupe Girlfriend" live on 'Conan'

The Three O'Clock - Her Head's Revolving

Three O'Clock - The Girl With The Guitar