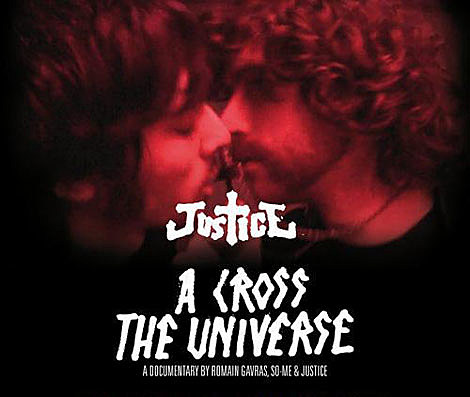 In the wake of the always fun, yet draining CMJ Music Marathon, two adages came to to mind: no rest for the weary and part of the weekend never dies. Like a dance-intensive extension of CMJ, last week in dance featured many acts from across the globe, though ultimately (at least from where I was standing) the French owned the dancefloor.

Strangely enough, my week in dance began, not in a club, but rather at the IFC. Thursday night I was fortunate enough to catch an intimate screening of "A Cross The Universe", the documentary by Romain Gavras, So Me, and Justice. I have to admit, I had a few preconceived notions going into this screening. I really didn't think I was going to like it based on the (NSFW) trailer. Images of kids going bananas, some more asininely than others, brought back entirely too many bad memories of the crowd that surrounded me at Justice's shows last fall at Terminal 5. I'm all for going crazy and having a good time, but there are enough people acting like assholes without a documentary glorifying them.

I don't want to spoil it, but after some initial footage of throngs of crazy Justice fans, it became apparent that this wasn't going to be the typical show-to-show tour documentary. Instead I found my preconceptions of a 90 minute long fan-film, crushed, and replaced with a shocking, behind the scenes look at Xavier de Rosnay and Gaspard Auge's adventures, mischief, and misadventures. Romain Gavras paints an unexpected and hilarious portrait of the pair, matching them with an equally amusing array of supporting characters from tour personnel to friends on the road, who dare I say, ocassionally steal the show away from French duo.

The film plays at times like a comedy more than anything: It's the Xavier and Gaspard show, only there's no acting and no routine. It's not so much that what is happening is funny (ok, in many cases it is), but rather Xavier and Gaspard being completely deadpan as event after hilarious event transpires. Initially funny situations and predicaments are transformed into laugh riots as Xavier barely responds, directing frustrated eyerolls and looks toward Gaspard. As amusing as I found this film, I thought it succeeded in giving the audience a very real image of what life is like on the road with the French electronic act as they experience their sudden rise to fame. However, as I left the theater there were ultimately two things I could not stop thinking:

1. Wow. That was f-ing hilarious and
easily better than any comedies I've seen this year.
2. I really can't wait to see Justice again!

Luckily I didn't have to wait long at all....

Justice (as well as So Me, SebastiAn, and Busy P) were deejaying at Webster Hall that night. I missed So Me's set, and unfortunately only caught about half of an excellent set from SebastiAn that was true to the creative, diverse, super crunchy, and fucked-with beats for which I love him. I gradually made my way towards the front of the absolutely packed Webster Hall toward the end of his set, knowing Justice would be on next.

At about 2 AM, Xavier and Gaspard took the stage and the place absolutely exploded with energy...at least it did pretty much everywhere, other than over on the left side where I was standing. Though I've often found myself praying for a nice little square of personal dancing space in sweatbox-like conditions, this wasn't doing it for me. I couldn't watch the crowd rage on while I danced passively on the sidelines, so I gradually edged my way into the thick of it. Despite how sweaty everyone was (which I hadn't really thought about before I dove in), being up there in the thick of things was definitely the way to experience the set.

Xavier and Gaspard did not play anything particularly new or exciting, but what they did do was deliver tons of their own excellent tracks, peppered with tons of other bangers on Webster's insane system causing the crowd to lose their collective shit in what was a display of some good ol' fashioned Ed Banger-induced madness. And speaking of madness...something possessed me to take my 2 week old camera out of my pocket and record Justice dropping what is undoubtedly one of my favorite participatory crowd jams: Justice vs. Simian - We Are Your Friends:

While this week is far less French-intensive, there is a diverse group of acts passing through from many other places, sure to make you get down. Here are some of them, starting with Thursday (11/6):

We all need an early night every now and then. This Thursday things get started at 8 at Hiro with a showcase put together by The Hours. The line-up features two dance meets rock bands, Cazals, from the UK and Fires of Rome from New York. The more strictly dance-oriented of you might've sneakily been exposed to Cazals' tunes after Gildas Loaec (Kitsune owner and former Daft Punk manager, who undoubtedly has a good ear) loved their track "Poor Innocent Boys" (check out the video below) and put it on Kitsune Maison 2 followed by "To Cut A Long Story Short" on Kitsune Maison 6.

Fires of Rome have been making the dance rounds recently with the first single (Set In Stone) off of their debut album You Kingdom You having been remixed by the likes of Don Rimini, M83, and Dada Life (whose version you can download at the top of this post) to name a few. Info on the party below: 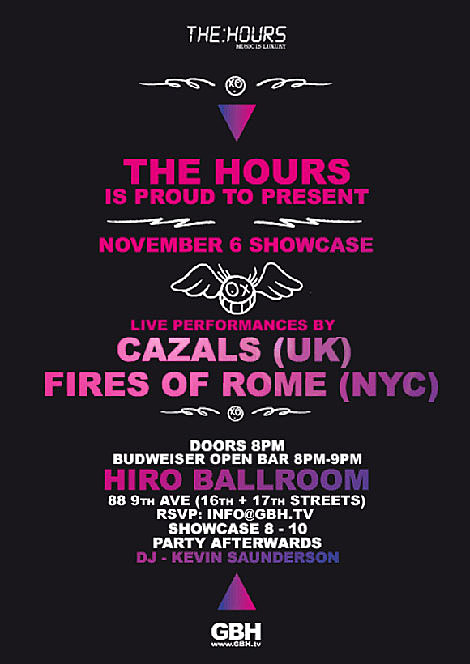 Free with RSVP to event@gbh.tv with your name and number of guests.

While it's nice to have an early night for a change...how could you leave Hiro knowing Kevin Saunderson (the godfather of techno responsible for the classic tracks Good Life (with Inner City), Rock To The Beat, Forcefield, and The Groove That Won't Stop to name a few) is going to deejay later on. When Kevin deejayed Sunday Best at the Yard back in July his set had people going wild. Check out the clip and party info below and download Kevin's Sunday Best set at the top of this post. 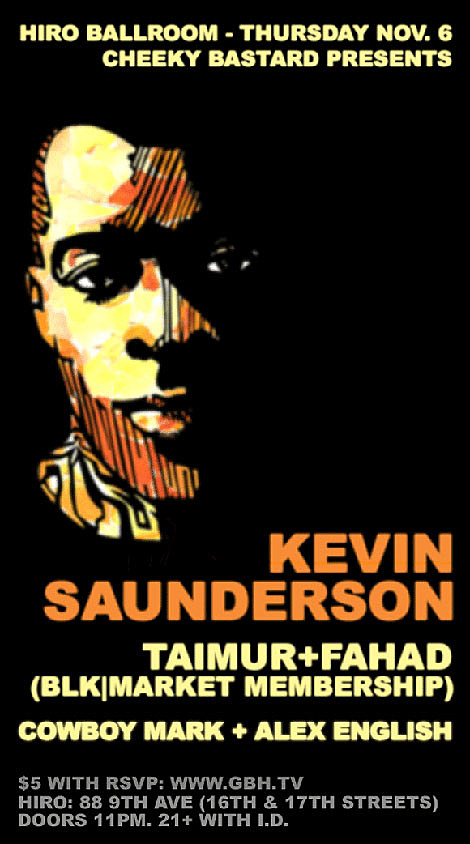 If you're feeling particularly energetic, I recommend scurrying over to Love in between the two parties at Hiro to see Tortured Soul. I saw them for the first time back in March and was unfortunately too exhausted from running around a lot that day to get down - a shame as Tortured Soul are a live band that perform great soulful house tracks. Info on the show below: 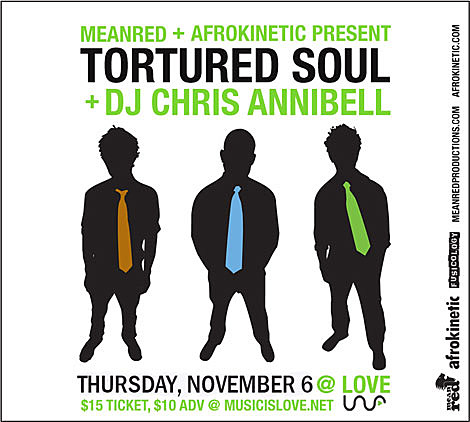 Also on Thursday, Derrick May is the guest dj at Fuerza Bruta. More info on that (including future guest deejays & discount ticket info) here. Derrick is also deejaying later Thursday night at Cielo with Stacey Pullen and Kenny Larkin. 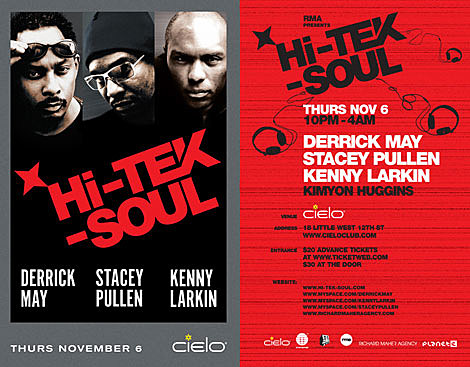 And one last option: 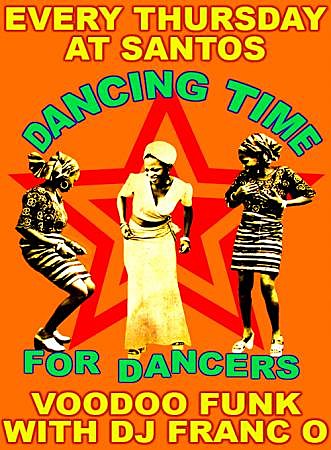 Friday night (11/7) there is even more from which to choose, starting with some dance music pioneers:

At Studio B there's a huge 20 Years of Acid House throwdown, happening with the man himself, Josh Wink, as well as DJ Pierre and DB, my favorite resident DJ Van Scott, plus many more in the lounge. 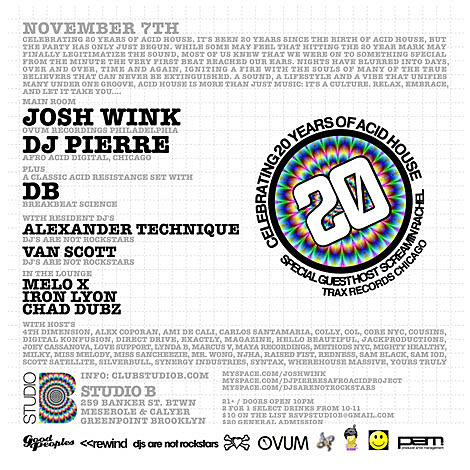 Also on Friday night, club veteran, Sasha, is appropriately deejaying at Webster Hall. While I am really, really frightened of the contingent this show could possibly draw, I'm curious to see what Sasha's show is like. He's been using Ableton to change things up during each stop on the Invol2ver tour. The show has been receiving great responses and features loads of remixes from the eponymous album including the likes of Thom Yorke, Ladytron, Apparat, M83, and many others. 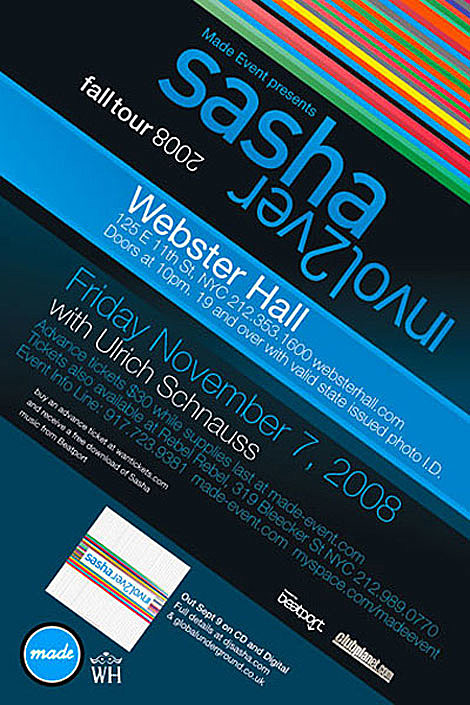 If you decide to head to this show, I highly recommend arriving in time to catch the opener, Ulrich Schnauss. I've seen Ulrich perform many times and his shows feature consistently beautiful, atmospheric, shoegazey electronic music that usually include some great visuals to accompany them. Check out some pics from when he played the Winter Garden back in June and be sure to check him out if you go to the Sasha show on Friday!

Another option for Friday night:

Sub Swara #33 featuring special guest dj/producer Ghislain Poirier from Montreal is happening at Love. Download his very eclectic Cosmopolitan Bass mix at the top of this post, as well as a recent set he spun on Solid Steel Radio. Tracklisting for both mixes and party info below: 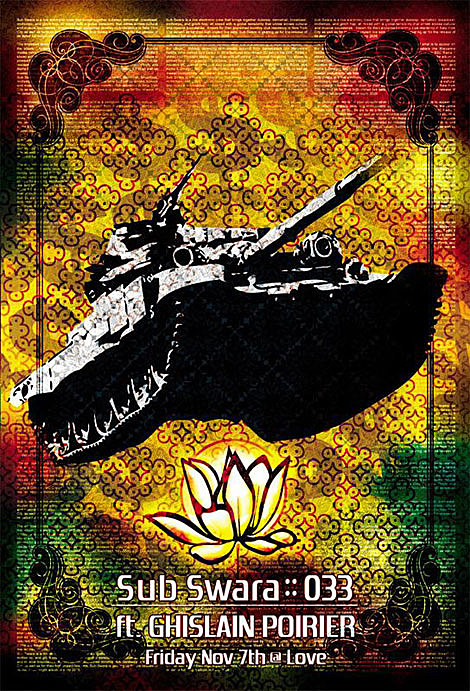 This Friday is the first Friday of the month, which means it's time for the second installment of the new monthly Good Fridays party at Le Poisson Rouge. This month's line-up leans a bit toward the electro side of things including dj sets from Kill the Noise, Guns N Bombs, Eamon Harkin & Rok One. Download Kill the Noise's TURN OFF / TUNE IN - VOL. 2 mix at the top of this post. Tracklisting and party info below AND we have 2 pairs of tickets to give away! TO WIN email BVCONTESTS@HOTMAIL.COM (subject: Good Fridays). Two winners will be chosen at random and contacted. 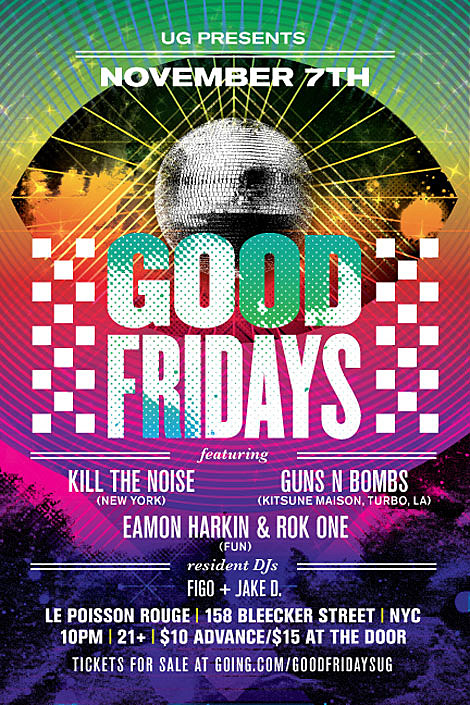 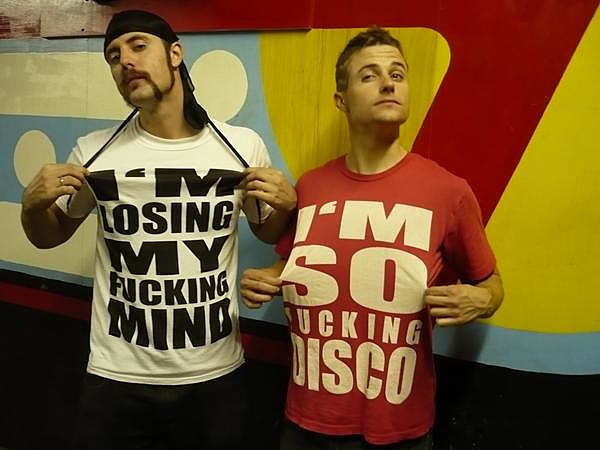 And finally in BK, the Flashing Lights crew (Nick Catchdubs, Jubilee, and Ayres) is back at Public Assembly with their weekly in the front room. This week's party features Roxy Cottontail and Fistfight (Andrew from Nacholovers). It's at 10pm, always free. Here's what they have lined up for November: 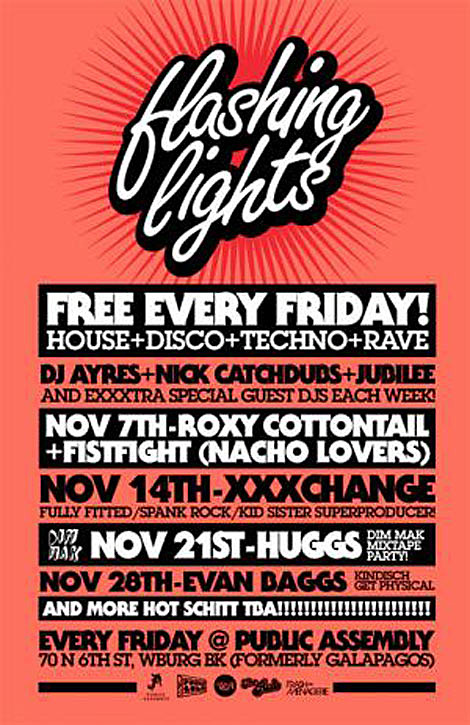 That should keep you busy for Thursday and Friday. Info on what's coming up this weekend, plus more on how the French killed it last weekend will be on its way soon!