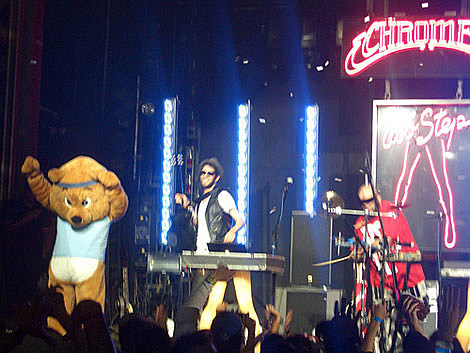 We're barely into October and signs of what a crazy month it's going to be are already showing. For me it all started Thursday night with Chromeo. Hell, even the bears were out! As always, Dave and P played a very clean, energetic set that included their entire album, Fancy Footwork, as well as a few older tracks from their first album. The crowd was losing it - singing, dancing, and screaming along in a way that I've seen only in response to these Québécois electro-poppers. In addition to being consistently good performers, Chromeo are so unassuming and appreciative of the success they've found, always making it a point to credit New York as one of the first places that welcomed them. It was a great (albeit familiar - I need some new songs!) way to start dancing in October.

I took a break before heading back to Webster Hall that same night, arriving just in time (after being thoroughly frisked and forced to throw out the suspicious, crumpled tissue in my pocket that was holding my earplugs) to catch the Bloody Beetroots deejay around 1. The crowd, despite being pretty decently sized, only took up about a third of the huge room. What they appeared to lack in size, was made up for in energy as about two thirds of the people there were relentlessly getting down - totally losing their shit, as the Beetroots played tons of their own tracks and reworkings. They also teased the crowd, cutting back and forth between their bangers and a few unexpected tracks like Sabotage by the Beastie Boys and Jump Around by House of Pain. Overall it was one of the crazy, relentlessly banging, unstoppable dj sets I've come to expect from the masked Italian duo. Unfortunately things seemed to be cut short after someone whispered something to them. Within minutes they were both zipping up their jackets and packing up in time for Alexander Technique to get on the decks again (he had spun earlier, right after Chromeo finished) at 2.

When I arrived just after 1, the place was absolutely packed (even more than when MSTRKRFT deejayed back in May). There was an empty area over on the left (mainly due to the fact that the view of the deejays was totally obscured by a huge speaker stack) where I spent my time during A-trak's hour long set from 1ish to 2ish, followed by most of Boys Noize's hour long set from 2ish to 3ish, before I headed onstage for the best part - their joint set that went until about 4. Each of their sets were very good. A-trak's was heavy on a lot of new tracks I didn't know that sounded great. One I did know, was Mr. Oizo's "Positif Extract" (which I happened to post about on my blog just one day prior) which sounded absolutely AMAZING out on a loud system. I can't wait to hear it when I'm out again.

I mentioned some concerns about Boys Noize's sets getting to be a bit repetitive/seeing him deejay too often over too short a period of time last week. My concerns disappeared pretty quickly as he opened with some of his own, newer material followed by a diverse mix of current electro, devoid of any of the transitions I remembered from any of the times I saw him in the past.

Despite being up close, the stage was so packed it was difficult to see who was deejaying when they were on together, but between the two of them the tracks were all over the place in an amalgam of old and new (including Necessary Evil by Armand Van Helden, Breathe by the Prodigy, Cross the Dancefloor by Treasure Fingers, Shake & Pop by Green Velvet, and the Boys Noize remix of Justice's Phantom as well as Feist's My Moon My Man to name a few) that had everybody losing it.

As we head into week 2 of the crazy month that is October there is sure to be plenty more where that came from, starting with Thursday (10/9) and ending with a chance to win free tickets for an event this Saturday night...

Stanton Warriors are at Love on their record release tour for Stanton Sessions Volume III out on Fabric Records on October 28th. Check out the tracklisting, some info on the Warriors' sound, and info on the party below: 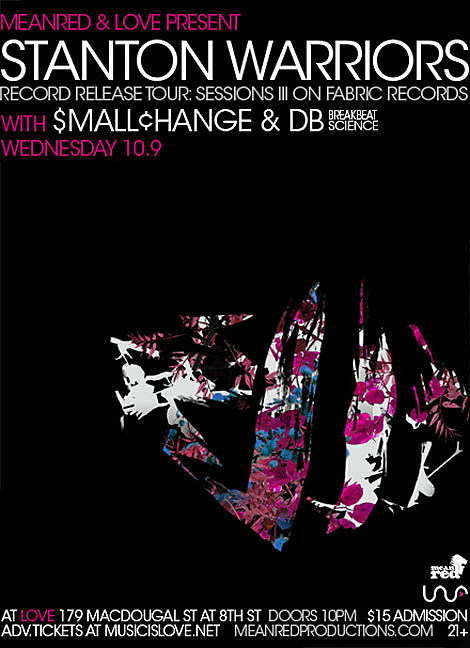 If you're in the mood for something more on the funk side, a new weekly party, Voodoo Funk is debuting at Santos this Thursday (in the basement), featuring DJ Franc O (Vampyros Lesbos - NYC and Soul Explosion - Berlin):

After spending the past three years trolling West Africa on a record-digging road trip, Franc O's back in the Big Apple, ready to spin the heaviest and rowdiest Afrobeat and African-funk records-- many of which have never been played in any club outside of West Africa... EVER!

It's $5 at the door. You can read more about Franc O's trip here and listen to some 70's African pop. 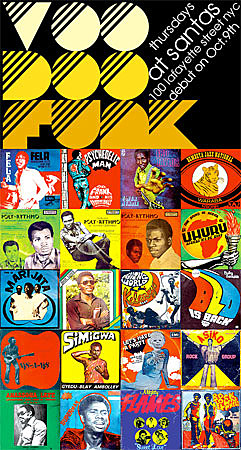 Friday night is when things really start to get crazy. One of New York's favorite monthly museum dance parties is back! The Fader presents One Step Beyond at the American Museum of Natural History with New York's own Mattie Safer (of the Rapture) and Paris' DJ Mehdi! Mehdi was great at Santos last month (and every other time I've seen him), and while I haven't seen any of the Rapture deejay in a while, an unmastered version of their excellent !K7 Tapes mix (out in US on November 25) is available over at Trash Menagerie! I listen to A LOT of mixes and this is one of the best, and most eclectic I've come across this year. Be sure to check it out as well as the Rapture's BBC Essential Mix while you're over there. 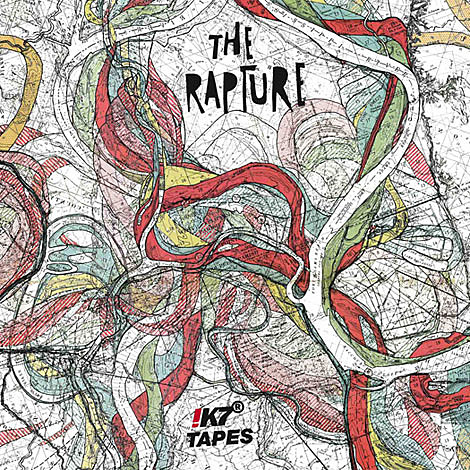 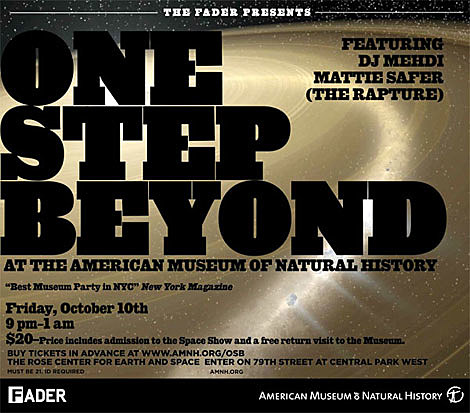 Another event, highly likely to be complete mayhem (hopefully in a good way) is MSTRKRFT at Webster Hall. This Toronto duo absolutely tore the place up at the GBH 10 Year Anniversary back in May. Having just released their Bounce single days ago, and being about halfway through their Fist of God Tour it's likely this Toronto duo and their great supporting acts (DJ Assault, Congorock - download his Trust No One mix at the top of this post- tracklisting below, and Felix Cartal) have the momentum to absolutely devastate the crowd with their heavy yet danceable sound.

Tracklisting - Congorock's Trust No One Mixx 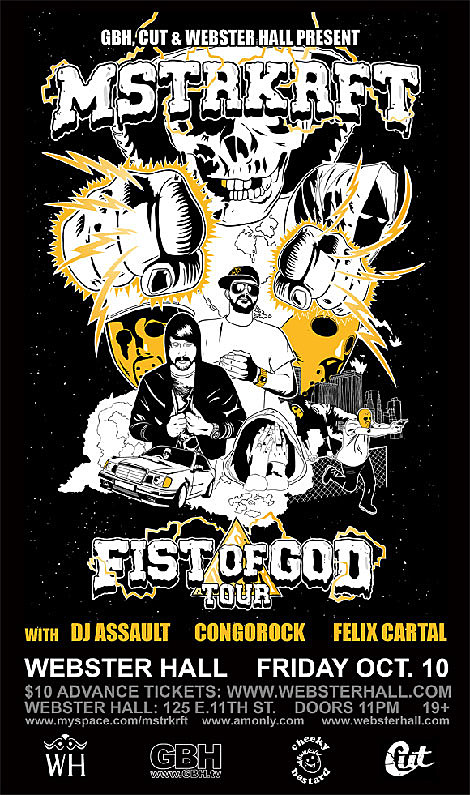 If you're in the mood for something a little more low key, but still fun here are two options, both in Brooklyn:

Sharegroove, a party featuring a mix of disco, funk, and classics is at Royale in Park Slope. Info below and download DJ Duckcomb's edit of "What You Need" at the top of this post. 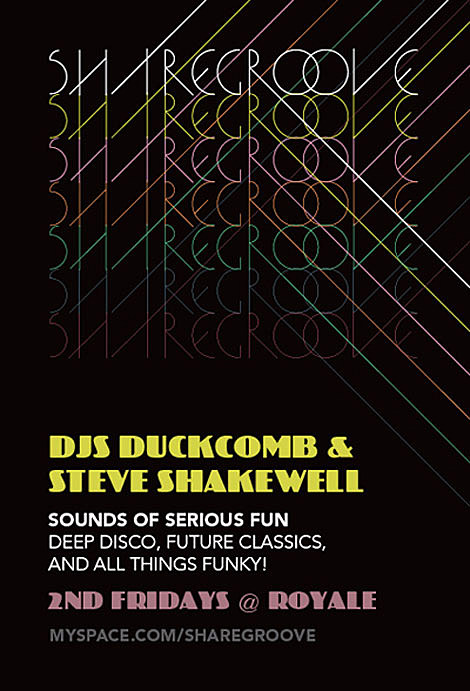 Meanwhile, the People Don't Dance No More crew (Robot Blair and David Bruno) will be holding it down at Trophy Bar with special guest Jacques Renault bringing some modern disco goodness to the floor. Be sure to check out his track, "Magic Games" on RCRDLBL and download Runaway's (Jacques Renault & Marcos Cabral) mix from May's People Don't Dance No More at the top of this post. 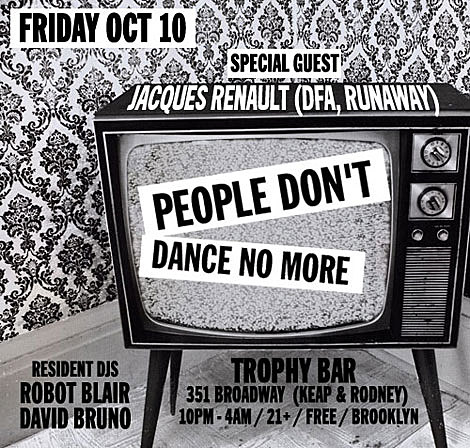 There's plenty more headed your way for this weekend, including Prime Time at Love on Saturday featuring a dj set by italo disco master,Alexander Robotnick. We have one pair of tickets to give away! TO WIN email BVCONTESTS@HOTMAIL.COM (subject: Prime Time). Include your first and last name. One winner will be chosen at random and contacted.