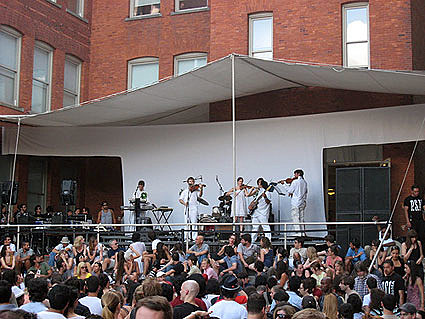 Despite things starting off a bit slow at PS1 on Saturday, I had a great weekend. I caught about an hour of Metro Area's first set. It was pretty fun and disco-ey, nothing mind-blowing though. Afterward Kelley Polar went on with a full band. The first song started off beautifully with some violins, then a dope bassline was dropped. Something went off in my head. I became instantly happy and thought I had just discovered another great live disco band along the lines of Escort. Unfortunately things wound down from there. The energy from the bassline was lost and the rest of the performance didn't really go anywhere memorable. After that I called it quits in the interest of resting up for the Beach Party at Water Taxi Beach later that night.

The atmosphere and vibe at the beach is really great. The crowd is a mixed bag, but the view of the Manhattan skyline at night is beautiful. There's sand under your feet. It reminds me that New York City is a bunch of islands. I felt like I was on vacation. On top of all that, the music was excellent. Unfortunately I have no idea who (out of Justin Carter, Probus, Todd Makinen, and My Cousin Roy) was deejaying then, but what I do know is that most of the people I was with brought up how great the music was multiple times. It was definitely one of the most laidback, yet intensely fun nights I've had in a while.

Sunday morning my Saturday night caught up with me and I arrived at Summerstage later than planned resulting in a less than ideal spot. Luckily Sharon Jones and the Dap Kings were in top form and gave one of the soulful, energetic performances for which they are known. My distance from the stage became unimportant.

All too quickly it was Monday again. Thankfully we're headed to yet another dance-filled weekend in New York. Here's what's going on starting with Thursday night: 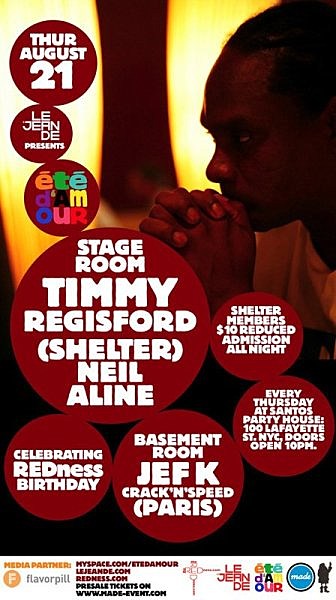 New York dance/house music legend Timmy Regisford is at the Ete D'Amour party at Santos where he will be spinning upstairs for the entire 6 hours! Resident of Respect and the Rex Club in Paris, Jef K (Crack & Speed) will be deejaying in the basement. $10 advanced tickets available here. $12 at the door.

For something more electro-oriented head to Hiro where LA Riots and Dave Nada will be deejaying. Early in the evening there will be a live set from Brooklyn- based producers Streetlab as well as a live performance by Wallpaper.

Free with RSVP (name & number of guests) to event@gbh.tv.

From the look of their myspace, LA Riots have been pretty busy lately. They recently remixed the Ting Tings' (who recently played McCarren Pool) "That's Not My Name" which you can download via RCRDLBL. They also did a guest mix for the Crystal Method's radio show which you can download at the top of this post, as well as their July Mix which is actually the first version of the the radio show mix that Daniel:

"...went a bit too housey/progressive with it towards the end and decided to make a new one for them.. this is the version that isnt going to air."