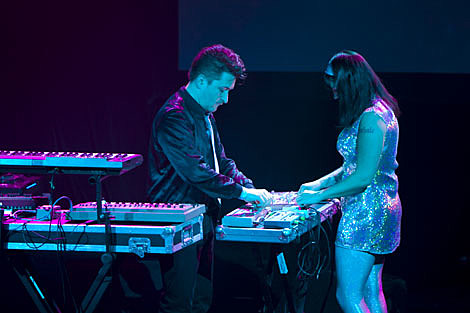 Last week my tiredness got the best of me and I voluntarily sat out the last Ete d'Amour party Thursday night (which I immediately regretted the next morning), and I accidentally slept through Ruff Club at the Annex Friday night. I finally managed to make it out Monday night for Miss Kittin & the Hacker at Irving Plaza though. From 10 until about 11:30 the duo treated the eager to dance crowd to a combination of early electro beats and dominating vocals. While there were people dancing everywhere from the beginning, I thought things started off a bit slow. However, by the third or fourth song the tracks got a little more upbeat and complex and the momentum of the set kicked in. The Hacker was responsible for the beats for most of the set, with Miss Kittin covering vocals which she periodically tweaked with what looked like some type of effects box and a laptop. About 3/4 through the set she played some live basslines which was a nice touch, while the duo fiddling with some electronics together toward the end yielded some of the evening's more interesting beats. Throw in a well done cover of Donna Summer's "I Feel Love" and you really couldn't ask for more from these electroclash pioneers.

Somehow we're already at the beginning of October. The combined amount of deejays & bands in town for CMJ plus the usual load of electronic acts passing through our city make this month unrivaled in terms of the amount of dance events scheduled to happen. Here we go with week #1, starting with Thursday (10/2), and ending with a chance to win free tickets for an event this Friday night...

Even though Ete d'Amour is over, Santos is keeping things solid with some fresh dance bookings. Upstairs the Trouble & Bass crew (Drop The Lime, Star Eyes, Math Head and The Captain) will be deejaying and Portuguese trio, Buraka Som Sistema will be making their New York debut with a DJ/MC set.

Lil John and Riot began making music together in their teens, but the core of Buraka Som Sistema formed when the two began working with Angolan producer, Conductor, who brought along an extensive knowledge of Kuduro music to the equation. The three draw influences from the music of their youth and culture, fusing it with the inspiration taken from music genres as diverse as techno, drum'n'bass, hip hop and dance music. 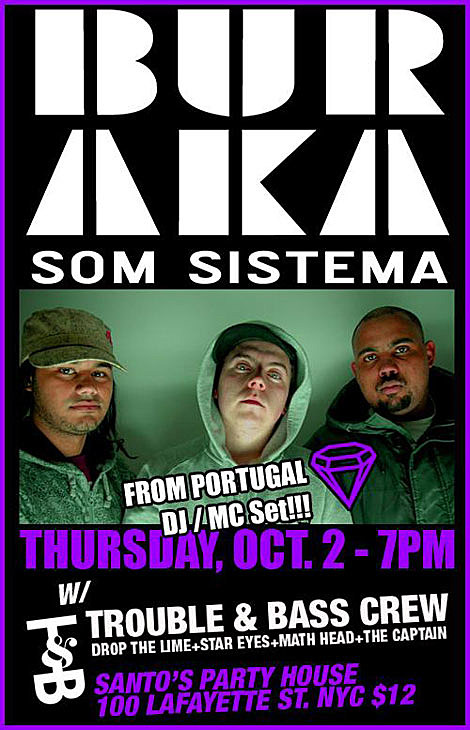 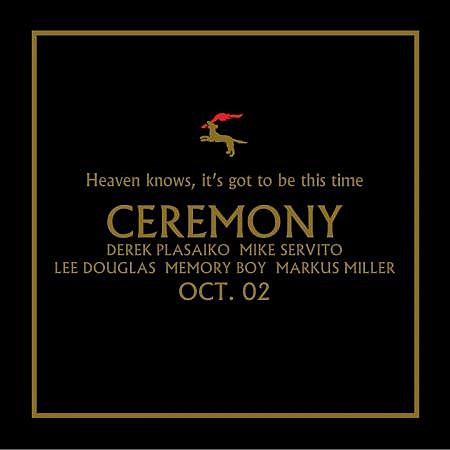 This Thursday, some of NYC's most revered DJs come together to help Memory Boy (aka John Selway) celebrate his recent wedding! You'll hear a mix of tech-house, minimal, disco, and more electronic genres that will make your heart sing! 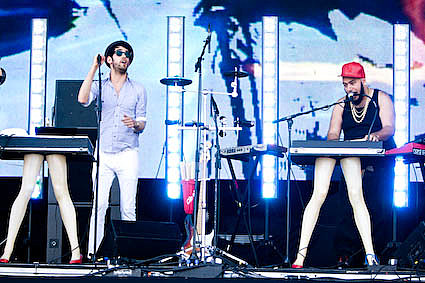 Chromeo (who were recently nominated for MTVU's left field Woodie award - check out the nominees and vote here) are at Webster Hall with Peanut Butter Wolf. While I'm always looking forward to seeing Chromeo, I always forget just how much I like them and just how catchy and tight this Montreal duo's retro-electro sets always are. From Hiro to Bowery Ballroom to the middle of the day at All Points West - these guys have never disappointed me. Highly recommended. Get a ticket here. Doors are at 8pm.

There are a couple of equally awesome options for things to do afterward:

1. You can stay put at Webster for a free party thrown by Cut featuring Alexander Technique and the Bloody Beetroots. 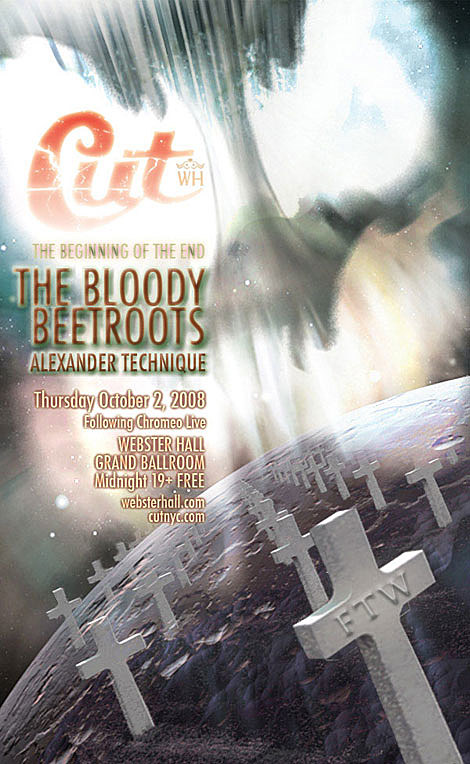 In terms of deejays this should be great - Alexander plays great, very upbeat, danceable mixes of current electro, but won't hesitate to throw in an on old school track or something totally unexpected. 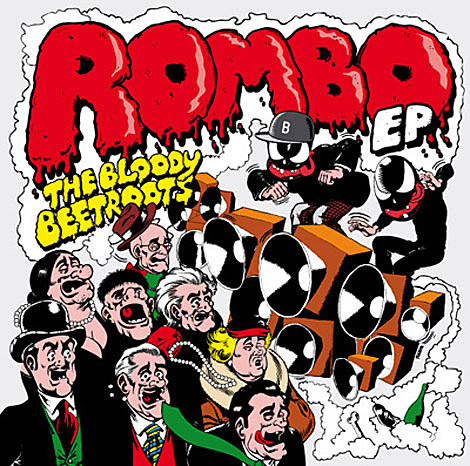 As for the Bloody Beetroots, I can't say enough good things about them. They've developed a sound that is unmistakably theirs at this point, continuing to evolve without getting stuck in a rut. Check out some footage of them rocking Germany below. The opening track is "Rombo" featuring Congorock (who will be here with MSTRKRFT, DJ Assault, and Felix Cartal next week) from their Rombo EP which was released just a few weeks ago, available now on iTunes.

Also, be sure to check out the mini-mix (available via podcast or as a direct download) the Beetroots did for XLR8R over the summer, featuring some of their recent tracks and remixes.

2. The official Chromeo after party with dj sets from Dave 1 and P-Thugg. You know how sometimes a band you like is billed to do a dj set, you go see them and they're really, really bad? This is definitely NOT one of those cases. While I haven't seen the pair deejay together, Dave held it down at Santos in July with a mix of new electro tinged with some great, classic French house. 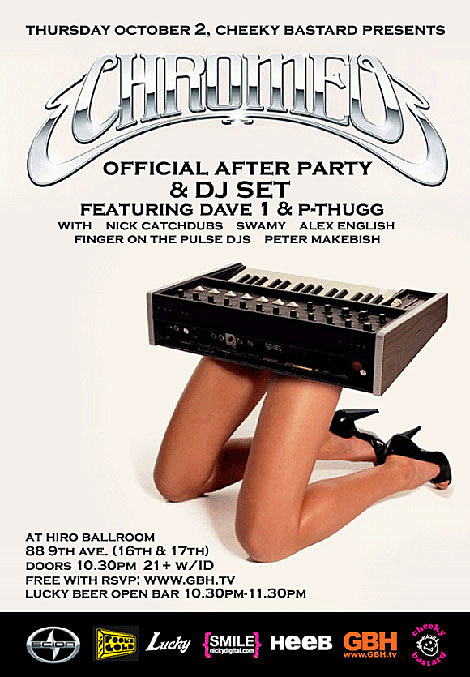 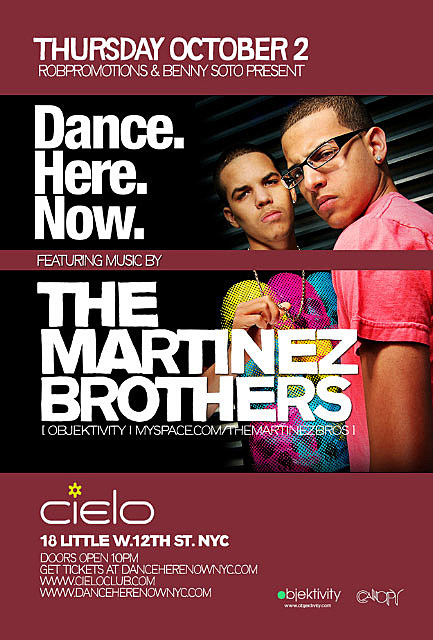 One final event for Thursday night:

AC Slater, whose Jack Got Jacked EP was just released Tuesday on iTunes, is helping Jeff from The Culture of Me and Sean Wilson celebrate their birthdays at Le Royale with Computer Club, B. Rich, VDRK, and Kuntrock Kidd.

All of the events mentioned above are happening Thursday night alone. There's a lot more on its way for this weekend, including a brand new party called Good Fridays at Le Poisson Rouge. It's kicking off with South Rakkas Crew, Treasure Fingers, and Designer Drugs and we have three pairs of tickets to giveaway for this Friday! TO WIN email BVCONTESTS@HOTMAIL.COM (subject: Good Fridays). Include your first and last name. Three winners will be chosen at random and contacted.