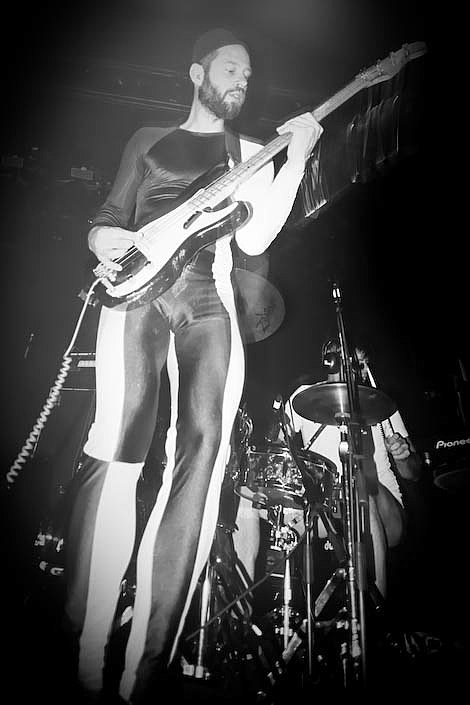 Last Thursday night (10/23) I headed over to Webster Hall. Lymbyc System, a duo from Brooklyn and Texas, opened. When they initially emerged and positioned themselves opposite each other - one behind drums, the other behind keyboards and various electronics, I thought I was tripping. With similarly thin builds and curly brown hair glowing under Webster's green light it was almost like looking at 2 people mirroring each other. The next 40 minutes or so of atmospheric, shoegazey jams which at times reminded me vaguely of M83 (minus the full band) and sometimes even Radiohead, perfectly suited my initial hallucinogenic impression.

After Lymbyc System my new favorite band (there, I said it), Whomadewho, took the stage. As much as I enjoyed their set the night prior at Mercury Lounge, the sparsely filled room was not ideal for dancing. While many would argue that Webster Hall isn't either, the crowd enthusiastically danced along to the Danish trio's funk meets disco meets rock beats. Definite highlight of the show: the crowd suddenly going absolutely crazy - jumping up and down, and singing along when the band broke into "Satisfaction".

Fujiya & Miyagi followed and played an equally tight set as their one at Mercury Wednesday night. Unfortunately the crowd at Webster seemed a bit less appreciative as F&M's performance fell on a number of deaf ears, evidenced by the constant, faint murmur of people talking throughout the show...such a shame.

Unfortunately things spiraled down from there, at least for me. After hearing people near me going on and on (I don't remember how long set-up took between sets, but suffice to say it was too long) about how great Crystal Castles are, I was honestly hoping they were right and worth the wait. Unfortunately, my Webster Hall neighbors were only right about one thing - the hell that was going to break loose when Crystal Castles started. It was absolute mayhem that I could've handled had I not been running around all week for CMJ. 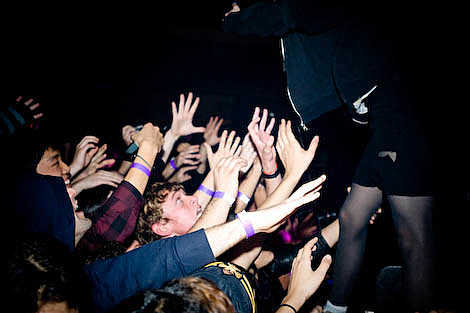 I quickly cut through the crowd until I was over near a much calmer section on the side and watched, baffled, as everyone went apeshit to Crystal Castles 8 bit beats which for me were rendered completely unenjoyable due to vocalist Alice Glass' screaming over them. I was hoping it would get better, but even when they played "Courtship Dating" (one of their tracks that I like) I couldn't get into it.

Once Crystal Castles finished I figured a lot of people would stay for the Fool's Gold CMJ party, but the place really emptied out. About 40? of us remained as a lot of scurrying and setting up was done on stage while Treasure Fingers spun some great classic-tinged, new French house (Lifelike, Louis La Roche, etc.). Once Webster finally started filling up over the next few hours it seemed Fool's Gold started leaning more toward its hip-hop side, with even Dave-1 from Chromeo taking his set the hip-hop route with a lot of classics.

I like some hip-hop...just not all in one evening. With all the hip-hop laden dj sets, plus live performances from Kid Sister and Trackademicks, it was just too much for one night. The thing I liked most about Fool's Gold's CMJ party last year was the balance it had between the electronic and hip-hop sounds (much like the label). There were a lot of hip-hop acts on earlier in the evening last year, but it was balanced by more electronic oriented sets from A-trak, DJ Mehdi, and Kavinsky later on. I still had a good time at this year's party, it just wasn't what I was expecting after last year's.

Pictures from the earlier part of the night are HERE.

Despite vowing to take a much needed break from Webster Hall after being there for 8 hours straight last Thursday, I might find myself there yet again, this Thursday (tonight, 10/30):

The Ed Bangers are back (in the form of Justice (dj set), Busy P, SebastiAn, and So Me) for the latest stop on the A Cross the Universe Tour, to promote/celebtrate the eponymous documentary about Justice (check out the NSFW trailer below). After witnessing sets from everyone on the bill over the course of 2008 that ranged from amazing (Busy P at Santos) to less than that (Xavier at Le Royale), it will be interesting to see how things go at Webster Hall. Hopefully if you wanted to go, you already got a ticket because it is sold out :(

JUSTICE - A CROSS THE UNIVERSE (teaser)
by edbangerrecords

If you didn't there are plenty of other ways to get down Thursday:

Justin Miller (DFA), Jacques Renault (1/2 of Runaway), and Céline are at APT. It should be an interesting evening as Jacques & Justin are more disco-oriented while Celine seems to have some minimal leanings. 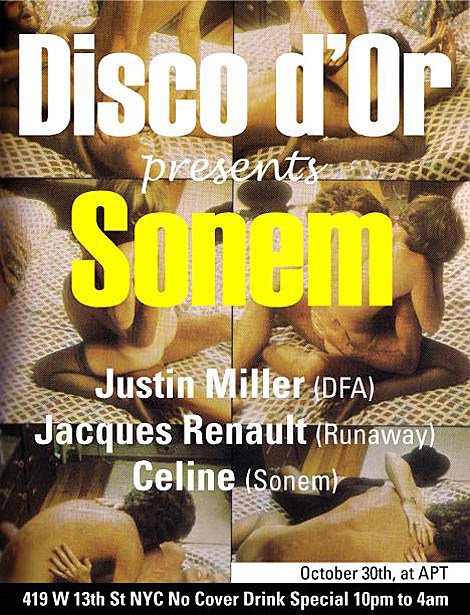 If you like funk, you've got two good options for Thursday night as well:

The new-ish weekly at Santos, Voodoo Funk (that I've heard some great things about), is happening as well as What the Funk? at Love which features:

Info on both parties below: 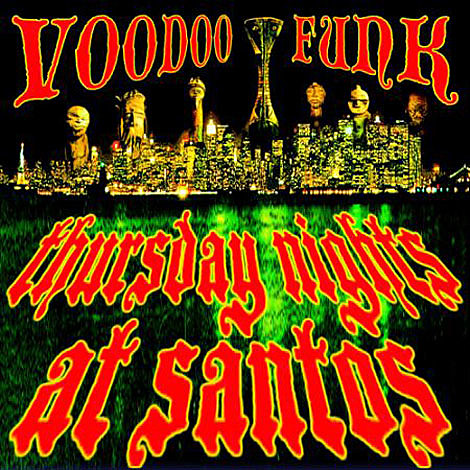 10 pm, $5. Also, be sure to check out DJ Franc O's radio show, Radio Freetown, on WFMU Monday nights from 7-8pm EST. You can listen to some archived shows here. 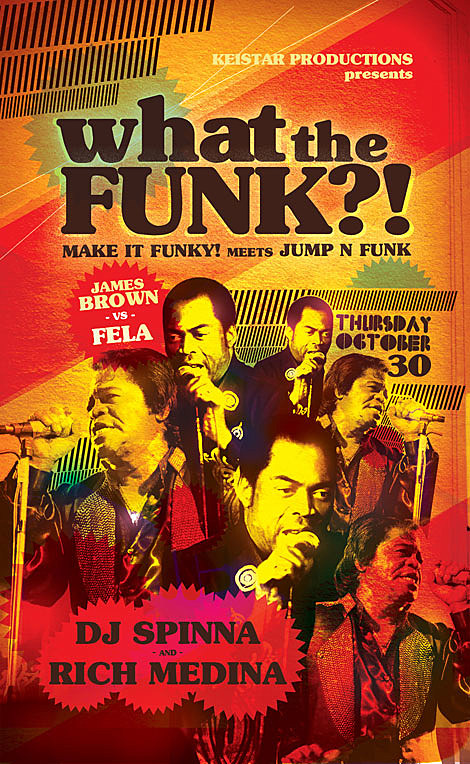 There's more great dancing to be done this weekend, heading into next week including...DJ Falcon at Le Poisson Rouge this Saturday night (11/1). We have two pairs of tickets to give away! TO WIN email BVCONTESTS@HOTMAIL.COM (subject: DJ Falcon). Include your first and last name, Two winners will be chosen at random and contacted.