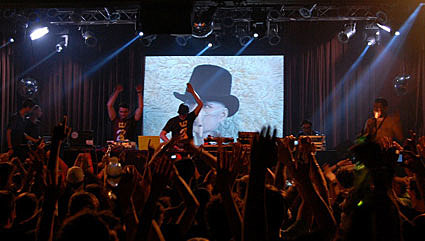 Last Thursday I started the night at Hiro Ballroom and hopped in a cab aroudn 12:30 to make it down to Santos just in time for a surprisingly darker, more thumping, and awesome DJ set than I expected from Fischerspooner. Santos was the most packed I've seen it and everyone was hitting the floor relentlessly.

At a quarter to 2 I tore myself away from the packed floor (didn't stick around the live show) and cabbed it to the Highline Ballroom to catch a very lively, interesting set that never let up from Modeselektor (Ellen Allien had already played). They have a very unique sound and style that made me remember why I was so impressed when I saw them at Studio B for the first time back in March. The tracks they create touch on a variety of influences and styles, with a common energy and bang that make them as danceable as they are listenable. You could tell from Modeselektor's expressions and enthusiasm that they really enjoy what they do. They also know how to not take themselves too seriously as evidenced by their passing of the mic and lip syncing of Bjork and Antony's vocals during their remix of "Dull Flame of Desire". It was just one of many highlights crammed into an intense hour of varied beats.

I'm not sure why, but this week there is so much going on. Things get started Thursday night and keep on going straight through to next week. Get ready!

Thursday night one of the Ete d'amour parties I've really been looking forward to is finally here! 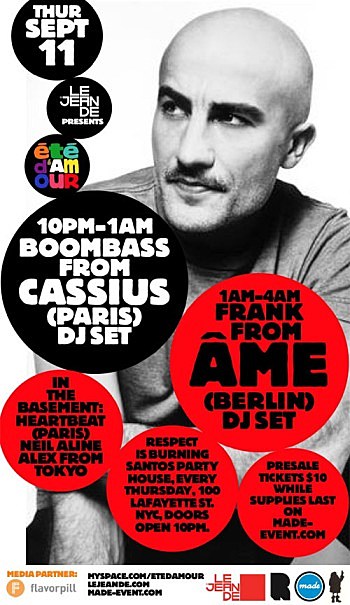 I'll spare you my I <3 cassius< em> tangent since I already had it a
couple of weeks ago. For further evidence of why I'm so hyped for this party download an hour long mix by Cassius from 2002 at the top of this post. I used to listen to it alot back when I was first getting into electronic music and still find it particularly awesome 6 years later.

As far as Frank from Ame (Innervisions) goes I'm not too familiar, but according to Santos:

AME-- French for "soul"-- stand on a musical nexus where Detroit techno, Chicago house, French touch and New York disco-house all intersect and interweave, entertaining the auditory senses. Frank from AME's sets always cover a lot of ground (but keep you grounded!) to the floor with their unwavering soul.

Check out their June chart.

If you're getting antsy or if that line-up doesn't appeal to you, there are some other events happening over in Meatpacking... 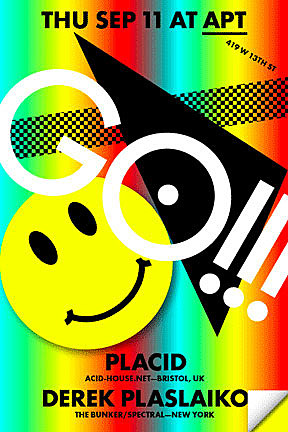 A few blocks away fashion week takes over Hiro with France's Wadklub party as well as Danish clothing label Panuu. Feadz from Ed Banger Records, designer/dj Kesh, and Wadklub resident DJ Dee Nice (download his Control mix at the top of this post, tracklisting below) take care of the music. 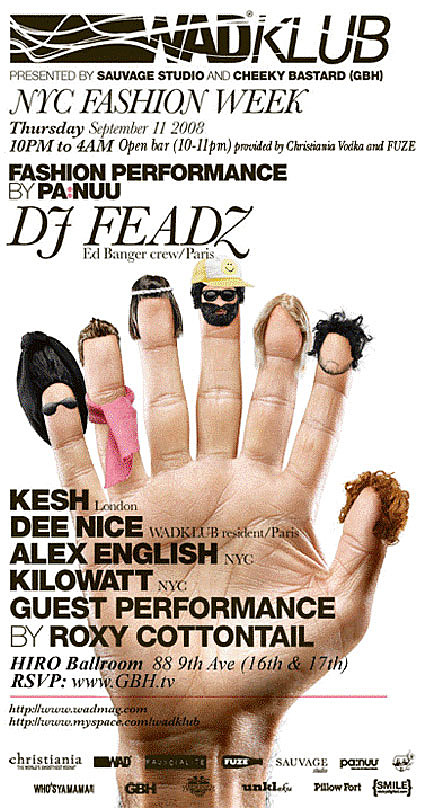 By the way, they have switched the entrance at Hiro to 88 9th Ave between 16th and 17th Streets. 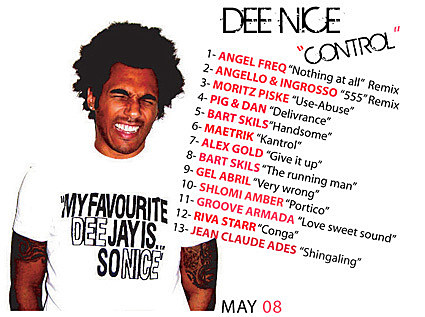 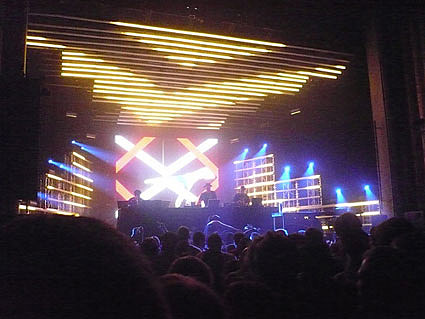 Friday (9/12) there is even more happening. For starters it's the first day of Minitek, a New York electronic minimal music festival. There are day and night events happening from Friday-Sunday. The day venue is Coney Island (R.I.P. Astroland) and the night venue is Penn Plaza. There are a variety of ticket options (single day passes, festival passes, VIP, etc.) available here or you can get tickets at Halcyon in Brooklyn as well as a 10% discount on vinyl featuring any of the artists playing the festival. The festival includes many different acts such as Richie Hawtin (who has a crazy set-up), Francois K (who is going to be deejaying Deep Space at Cielo every Monday of this month), Heidi (from Get Physical which recently got digital), and M.A.N.D.Y vs Tiefschwarz to name a few. Check out the full line-up and set times here.

Starting early Friday evening (7pm-12am), NY-based clothing company, Mishka celebrates their 5 year anniversary with Nick Catchdubs (check out some downloads from last Friday's post), Drop the Lime & the Trouble & Bass crew, and Mr. Mad Decent (whoever that is ;) at the Red Bull space (40 Thompson St.). There will be free drinks and gift bags all night and the party is free with RSVP to 5th@mishkanyc.com. Include your and your guests first and last names (no +1's). 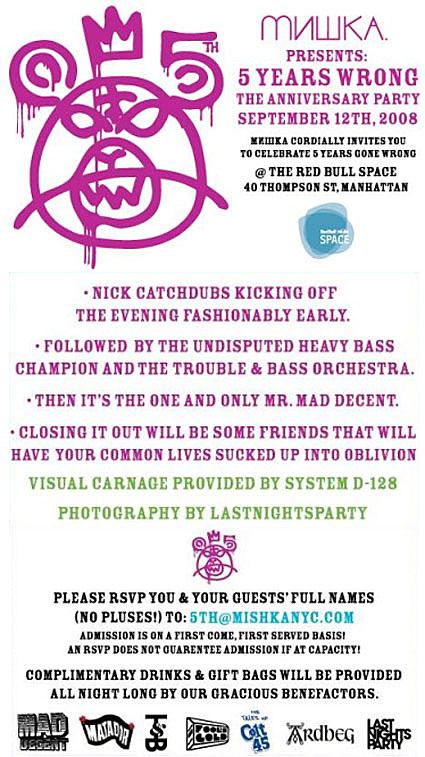 From there you can head to the after-party which is the new weekly, Flashing Lights, at Public Assembly (formerly Galapagos). This week's special guest is Egg Foo Young. Info + future line-ups below. As always, the party is free! 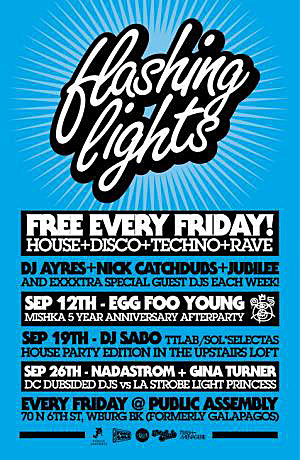 Friday the Robot Rock party at Le Royale also looks good with Linus Loves. I initially had him on my radar back when he was on Breastfed, (which he co-owned with Mylo) which doesn't seem to be the case anymore. Back then Linus Loves was Duncan Reid and Kevin McKay. now it's just Duncan. I've never seen him live before but the older stuff on his myspace sounds good to me. He also recently remixed Ladyhawke's "Dusk til Dawn" which is nice and catchy. 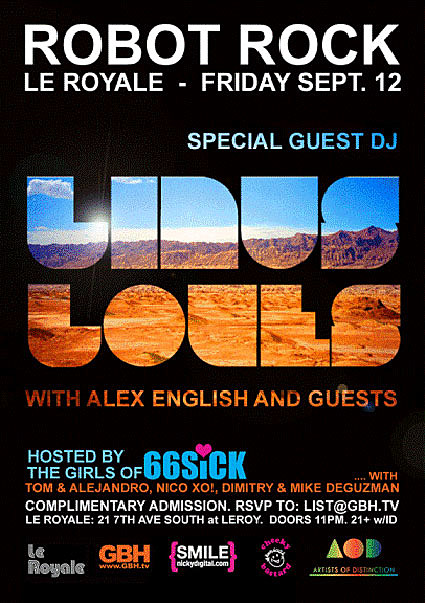 Free with RSVP to list@gbh.tv with your name and number of guests. Be sure to put "Linus Loves" in the subject line. When you arrive, tell the doorperson you are on the GBH guestlist.

One last option for Friday if you're in the mood for something less electro-driven and more "Deep Disco, Future Classics, and all things Funky .. ". Sharegroove is where you should be: 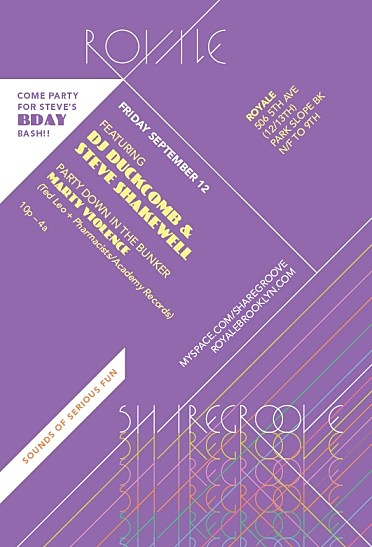 *NOTE* this party is at Royale in Park Slope, NOT at

Download DJ Duckcomb's edit of "What You Need" at the top of this post and check out the most recent Academy Radio show here featuring DJ Duckcomb and Steve Shakewell.

Whether you decide to stay in and save up all your energy (boo!) or use Thursday & Friday to get warmed up...prepare yourself for an even more dancey weekend ahead.