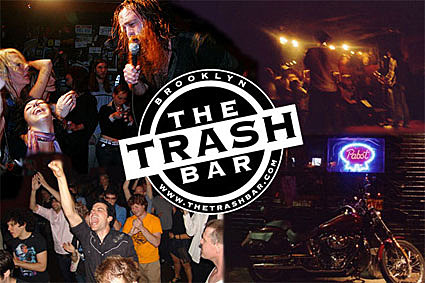 This year has already seen the closing of 285 Kent, Death by Audio, and Spike Hill and there are just three nights of Glasslands left...and now comes word that another long-running Williamsburg venue, The Trash Bar, will be the next victim of the (seemingly) never-ending real estate boom:

According to the bar's booking agent, Walter Stack, rising rent is, unsurprisingly, the culprit. "We can't afford to stay in Williamsburg," he says. "Our rent is going to quadruple and that's out the question." In the last four years the bar's block on Grand Street has changed, he said, noting nabe newcomers like condominium complexes and a multi-tiered movie theater.

But there's hope: After shuttering in the spring, the beloved dive may relocate. However, with owner Aaron Pierce currently out of the country, it's unclear where that may be--if at all. "We might look at Bushwick, but we'd need to find the right space," Stack says. -[Time Out]

Time Out also says the venue has shows booked through March. Before it was Trash Bar (which it has been for 10 years), 256 Grand St was Luxx which, for a brief time, was pretty much the epicenter of the short-lived electroclash scene, and also saw performances by Scissor Sisters, The Libertines, The Decembrists and more. Even if The Trash Bar had become a as known for its tater tots as the bands that played, we're still sad to see it go. May they find a more hospitable locale.