The Trash Bar on 'Forever' 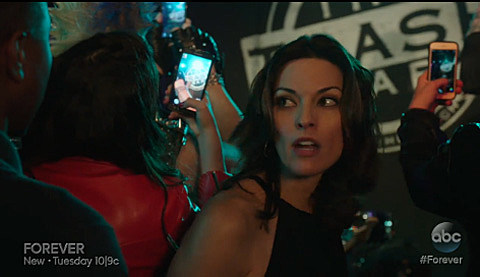 The Trash Bar is still open on Grand St. in Williamsburg (former home of LUXX), though it was supposed to close in March. It's been in that location since 2004, but it will soon be moving to Bushwick. The venue's calendar goes through the end of April currently. As Free Williamsburg points out, The Trash Bar was recently used as a location and plot point on lighthearted ABC fantasy/mystery series Forever where it too is being closed (in this case, demolished for condos). But the fictionalized version was "around before CBGB" and may have a few skeletons in its closet. Or walls, specifically. (The episode is titled "Punk is Dead.") Also, this Trash Bar is being demolished by Cuba Gooding Jr. There are whiffs of the infamous "punk rock" Quincy episode here, and you can watch a clip (featuring punks Blacklist Royals) from it below.

The Trash Bar will also be seen in upcoming Amy Schumer/Judd Apatow film Trainwreck which is out in July. The location and opening date of the new Bushwick location are still TBA, but the owner is also opening a "family friendly small plates restaurant" called Gitano which is in the old Room 63 space off the Broadway stop on the J/M line.