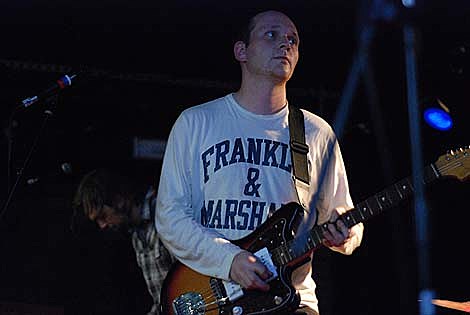 Last Wednesday (10/22) night I was initially drawn to the show happening at Mercury Lounge because of Fuijiya & Miyagi. The trio have never failed to flawlessly deliver their whisper-soft vocals, and laidback, funky instrumentals any of the previous times I've seen them. Wednesday's show was no exception. They played a pleasant mix of both old and new tracks (partial setlist below, the dashes are songs I couldn't identify, and I am pretty sure they played "Uh" but forget exactly when), some of which had a nice extra kick thanks to the addition of drummer Lee Adams, joining the performance a few tracks in.

Prior to Fujiya & Miyagi I witnessed Tobacco which consisted of 2 people poring over a table of electronics on the left side of the stage while some truly wild retro video footage (that had been edited to sync up pretty well with the music) played against a screen set up on the right side. Overall it was an enjoyable experience, but I liked the visuals much more than I liked the music. While the sometimes trippy, electronic jams were very well suited to the far out visuals, I didn't really find anything about them too remarkable. The visuals captured my interest more from the get-go and nothing Tobacco were doing over on the left reeled me back in.

The most pleasant surprise of the line-up (and of my whole CMJ experience for that matter) was Whomadewho, who I have affectionately and with the utmost respect been referring to as "these crazy, weird, dudes from Denmark who rock". I knew I was in for something when, for starters they took the stage in those outfits, but also when guitarist/vocalist Jeppe Kjellberg announced "Yes, please come closer. We don't bite...even though we are VIKINGS!" after two girls scurried up to the front of the crowd at the end of their first song.

Whoemadewho played quite a number of songs from their self-titled debut album from '05 (which I can't wait to check out), which were funky, dancey, and rocking but not categorizable. Also be sure to look for their new album, The Plot on its way this coming February. While I really enjoyed their entire performance, as a huge fan of electronic/dance music, I could not help but freak out when they began playing a live version of Mr. Oizo's "Flat Beat". I was ready for Benny Benassi's "Satisfaction", but was totally unaware that they cover "Flat Beat" too. Unfortunately the maybe one quarter full Mercury Lounge was not the ideal setting to get down. Luckily I was able to catch them a couple of more times during CMJ, one of which was at Studio B Saturday night. Check out the video I took of them performing "Flat Beat" at Studio B:

This Tuesday (10/28) you can start dancing the week away at Cielo to some of Gui Boratto's beautiful beats. You can learn more about how he creates them in this interview he did with Rhythmism. Event info below: 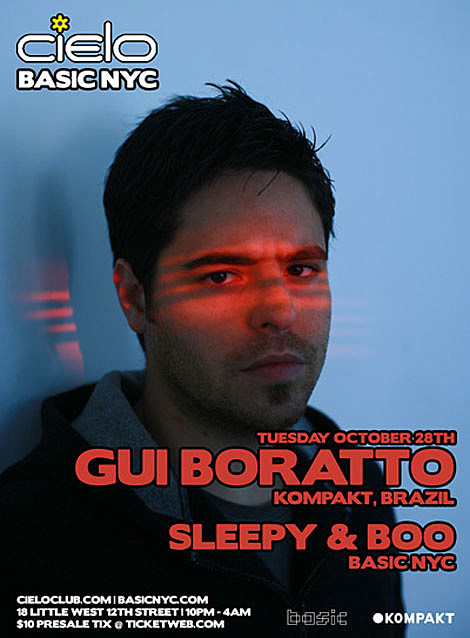 This Wednesday (10/29), Crookers, a dj duo from a recent, outcropping of deejays and producers from Italy is at Le Poisson Rouge. While I'm curious to see them after missing what I've heard was a great show at Webster Hall in June, I must say my initial enthusiasm for their music has waned. While I was very excited for their new sound and absolutely love their take on the Chemical Brothers' "Salmon Dance", I wasn't too into a few monthly mixes they released, and their tracks gradually started sounding a bit too similar to me. I'm really hoping their deejay set this Wednesday brings me back. 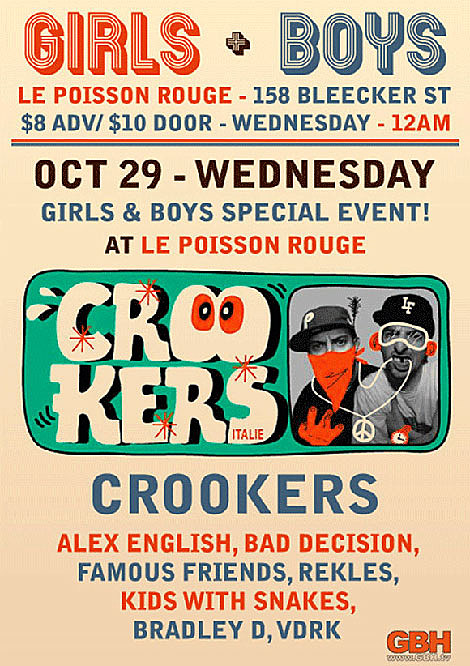