DOWNLOAD: The Twilight Sad - Reflection Of The Television (MP3) 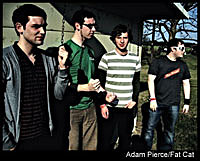 The Twilight Sad is going on a lengthy fall tour with labelmates (Fat Cat) and countrymen (Scotland) We Were Promised Jetpacks. The first leg of that tour, which also features Frightened Rabbit, kicks off September 13 at Monolith Festival. Frightened Rabbit (who just played the Siren Festival) is replaced by Brakesbrakesbrakes for the second leg, which includes a stop at the Bowery Ballroom on October 6th. Tickets are still on sale.

The Twilight Sad's new record, Forget the Night Ahead, will be out September 22nd on Fat Cat. A track from that is above, with a new video for the album's first single, "I Became A Prostitute," below.

All Twilight Sad tour dates are below...

The Twilight Sad - I Became A Prostitute (Long Version)