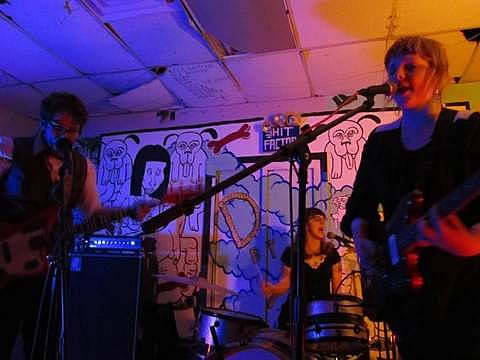 Richmond punks The Two Funerals list their band interests as "DIY spaces, house shows, feminisms, and ROCKING WITH THE TOUGH GRRRLS," and their influences as Sleater-Kinney, Bikini Kill, and Sonic Youth, so they're probably pretty psyched that they're opening for former Sleater-Kinney member Corin Tucker when her tour passes through their hometown. And from the sounds of the title track of their 2011 Boys Club EP (which you can stream below), The Two Funerals wear their influences on their sleeves, but they wear them well. Maybe you caught the band in NYC opening for PS Eliot at their final show (and are playing with PS Eliot spinoff Swearin' at a Philly show on their upcoming tour), or in NJ earlier this year at C.L.I.T. Fest.

Those aforementioned upcoming shows with Corin Tucker and Swearin' are part of a 5-night tour of the Northeast which kicks off in CT next week and culminates with a Brooklyn show at Tommy's Tavern on September 20 (1041 Manhattan Ave in Brooklyn) with Marvin Berry and the New Sound, Wide Angles, Gameday Regulars, and Crow Bait. Admission for that show is $5 at the door.