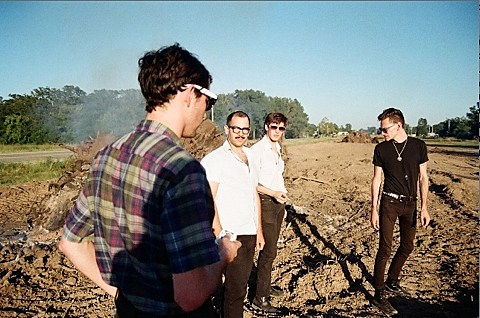 New England psych punks The Ukiah Drag released their Dirt Trip 7" via Wharf Cat Records last month with the title track on the a-side, backed by a cover of '50s-era R&B group The Coasters' "Poison Ivy." "Dirt Trip" has just been given trippy video treatment that matches the band's sleazy psychedelia (filmed/edited by ZZ Rameriez). You can check that out, and stream the Coasters cover, below.

As discussed, The Ukiah Drag will be heading out to support Merchandise on their upcoming tour, making for some excellent double bills. They'll be at Merchandise's NYC show happening on June 22 at Saint Vitus (tickets), but no opener was announced for Merchandise's Glasslands show (6/21) yet.

All dates are listed, with the video and stream, below...

The Ukiah Drag ---- Dirt Trip from Cult Maternal on Vimeo.