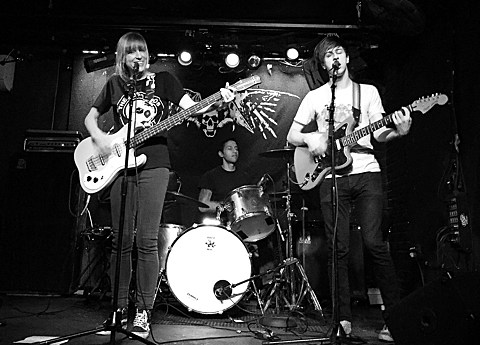 Brooklyn pop punks The Unlovables were around in the mid 2000s and put out two albums, 2005's Crush*Boyfriend*Heartbreak and 2007's Heartsickle, home to memorable tracks like "Today's the Day (I Finally Kissed You" and "Feelin' All Emo (Since I Broke Up With You)." Both albums are the kind of fun, catchy, Ramones-inspired pop punk associated with Lookout! Records, The Queers, Screeching Weasel, and other things in that realm.

They were mostly inactive for a while, but recently began playing shows again like NYC with Plow United and Iron Chic in 2013 and The Fest last year. This year, they're finally returning with a new release planned for August and are continuing to play live. The release will be a split 12" with Dirt Bike Annie called "Reunion Show," which will be out in late August on Whoa Oh Records. The only show booked right now is a return to The Fest, but stay tuned for more. Meanwhile, stream both of their albums, which were just added to Bandcamp, below.

Unlovables singer Hallie Bulliet is now also in another band, Hiccup, where she splits vocal duties with Alex Knudson. So far Hiccup have released two demos, "Dad Jokes" and "Whatev, It's Cool," and a third track, "Yeah," premieres in this post. They're not too far removed from The Unlovables, but they feel a bit more subdued -- "Dad Jokes" borders on Smiths/R.E.M. style jangle pop. Listen to all three below.

Hiccup are also playing The Fest this year, and so far they have four NYC shows happening before that. The first is tonight (5/1) at Fat Baby with Top Bunk and Lover's Speed; and later that month they open the free Jeff Rosenstock show at Brooklyn Night Bazaar on May 30.

Then, they play a show with Tim and Eric's pal David Liebe Hart on June 15 at Shea Stadium, and after that they open for another Brooklyn pop punk band Chumped at Palisades on July 1. That show is also with Early Riser and ticket info is TBA.

That show is one of several dates for Chumped, including a tour with The Menzingers and Roger Harvey and The Fest. All of their dates are listed, with the three Hiccup songs and the Unlovables album streams, below...