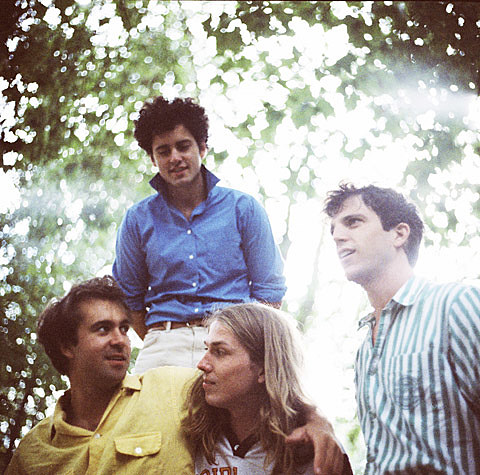 When I attended M for Montreal a couple weeks ago the British journalists in tow (NME, The Fly, Gigwise) all were wondering if I'd heard The Vaccines and what I thought about them. "They're the most exciting guitar band I've heard in ages," gushed one of them. The band only played their first-ever show two months ago and just released their debut single, but will make their American debut headling Bowery Ballroom on January 20 (moved from Mercury Lounge) and then play Glasslands on Jan. 22. Clearly, the UK music press has premature hype skills bloggers can only imitate. Add to this a much-downloaded demo... and it smells a little of Arctic Monkeys doesn't it?

Not musically, mind you, just the groundswell of interest. Just who are The Vaccines? Well, you might have seen singer Justin Hayward-Young at Pianos last year when he called himself Jay Jay Pistolet. He's ditched the neo-folkie in favor of revved-up, Pixies-influenced guitar pop. The Vaccines guitarist Freddie Cowan is brother of Tom Cowan of The Horrors. How are they taking the instant fame? The Guardian published a nice, considered article on the band last week:

[Young] says he's "a worrier" and fears there will be a backlash. "The downside of media attention is that people don't ask 'Are this band good?' but 'Are they as good as people say?'" he says as we discuss the example of the Drums, who began 2010 in a similar if lesser blaze of hyperbole. "But we didn't start the band to be great white hopes. We started the band to be in York tonight playing to 100 people. Y'know, we're in a room above a pub, and it's raining. It's not a 'pinch yourself' existence."

So will the Vaccines survive the current wave of hysteria? They may be the hottest new band in Britain, but the next stop for the Vaccines is a pub in Derby.

"We really haven't done much," says Young, softly but firmly dismissing any more talk of hype. "Later was different, because it was an opportunity to play the songs. But we're playing everywhere we can, and the people getting behind us are doing it because they genuinely like the band. We can't really feel guilty for that. We're doing everything the right way."

As for the hype, American and UK audiences don't seem as in tune with one another as they did during the Arctic Monkeys mania of 2005. Anyway, there are two Vaccines tracks to download above. They are admittedly pretty catchy songs. Worthy of the hype? Decide for yourself.  Tickets are still available for both the Bowery and Glasslands shows. Oberhoffer opens at both. The Vaccines will also be over for SXSW as well. You've been warned. All upcoming Vaccines live dates and the video for "Wreckin' Ball" and some live clips are after the jump.

The Vaccines - "Blow it Up" on Later with Jools Holland

The Vaccines - "If You Wanna" on Later with Jools Holland