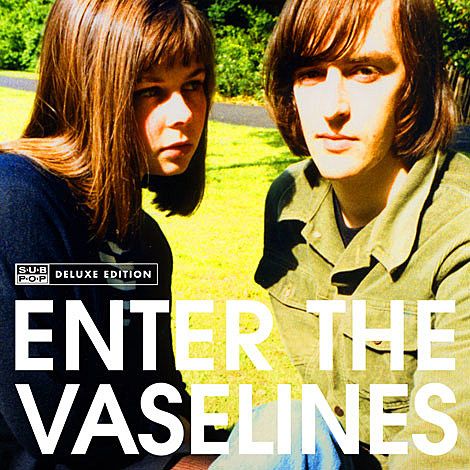 For those of you unfamiliar with [The Vaselines], they are quite strange. If the name did not point that out to you, songs like 'Rory Rides Me Raw' and 'Sex Sux' should give you an idea. The quiet looking Frances Mckee announces that they have been away for so long because they were having sex changes!

The exciting news is that they also added a couple of new tracks to the setlist, like 'Picked a Cherry'; is this hinting at a longer stay for the band? They have James Seenan on bass and Charlie Kelly, singer Eugene's brother, on drums. Eugene, complete in red and black knitted jumper ('Dennis the Menace!') will not give anything away...

Finishing on title track 'Dum Dum' with it's (sic) punky Buzzcocks-style edge, this was a gig I am extremely proud to have witnessed. Some may say they lack stage presence, can't play their instruments, blah blah, but the structure of the melodies and simple yet unforgettable songs will stay with me a long time. Let's hope there are more from the Glaswegians on the way.[eGigs]

The above review is from the Vaselines' first London show in 20 years. It took place just a few days ago - March 27, 2009. The band re-formed in July 2008 to play Sub Pop's 20th Anniversary Festival and made Brooklyn and Jersey stops on the way (as well as a few others, like its native Scotland).

The band returns to North America again in May for a set of tour dates. Those include a May 18th stop at the Music Hall of Williamsburg in Brooklyn. Tickets for the show go on sale Friday, April 3rd at noon.

The band's new collection, Enter The Vaselines, comes out May 5th on Sub Pop (details below).

Also below: the setlist from the band's March 27th London show, new album track list, and all tour dates...

You Think You're A Man
Lovecraft
Dum Dum

This new collection is effectively a deluxe-edition reissue of the 1992 Sub Pop release The Way of The Vaselines with a new title and new cover art from the band, and a whole lot of new material (the entirety of the 17-song second CD/third LP has been added). Originally mastered from a cassette tape, The Way of The Vaselines compiled the band's two EPs (Son of a Gun and Dying for It) and their sole LP release (Dum-Dum). Enter The Vaselines is the definitive triple LP/double CD Vaselines collection. It includes new mixes and re-mastered versions of everything by The Vaselines, plus never-before-heard demos, and live recordings from 1986 in Bristol and 1988 in London.[SubPop]