The Vaselines @ a UK gig in September (photo by Dani Canto) 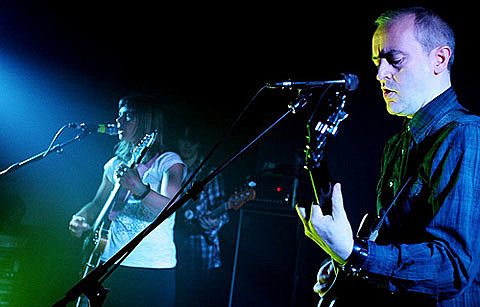 The Vaselines are back, they still sound great, and if naming their new album Sex With An X didn't give it away, they're just as sexual as ever. Songwriters Eugene Kelly and Frances McKee are now joined on stage by Stevie Jackson and Bobby Kildea of Belle & Sebastian and Michael McGaughrin of the 1990s (the band). McKee prefaced her introduction of the new band members with, "Just so you know what they're called...in case you wanted to slack them off later." This was just one of her bawdy jokes, which played almost as important of a role in the set as the songs themselves.

The set at Webster Hall Wednesday night (10/6) was a good mix of classic Vaselines songs and songs off the new album, which, although released 20 years after their debut full length, picks up right where The Vaselines left off. There was such a high amount of energy on stage throughout the entire show, and the band didn't miss a single beat. They played through fan favorites like "Son of a Gun" and "Rory Rides Me Raw" just as powerfully as the new tracks. During "Molly's Lips," McKee invited opener Jeffrey Lewis and his drummer on stage to dance and play the bicycle horn.

After about an hour of playing, Kelly and McKee announced they had one song left, and ended the show with "Dying For It" which resulted in multiple audience members tossing their beers into the air and breaking out into a push pit. The Vaselines then left the stage, only to return momentarily in response to the audience's cheers for an encore. They opened the encore with their cover of Divine's "You Think You're a Man" and then ended with "Dum Dum," leaving the crowd seeming extremely satisfied (other than ignoring multiple cries to play "Sex Sux").

Both The Vaselines and Belle & Sebastian (whose NYC show was at Williamsburg Waterfront) are now on intersecting tours. Jeffrey Lewis opens for the Vaselines until October 16th.

"Jeffrey Lewis, who opened the show, also keeps his music simple, strumming a few chords on a guitar that may well be held together by the stickers covering its front, and leading a band that piles on a cheerful clutter. But he's a clever, articulate wordslinger, coming up with rhetorical conceits -- one song, "Cult Boyfriend," compared his romantic appeal to that of cult bands and films -- and putting in a lot of preparation.

He's also a comics artist, and his set included two short films -- essentially slide shows of his elaborate drawings -- that were finely reasoned histories, in rhyme, of the Soviet Union and the French Revolution, affirming populism through primitivism." [NY Times]

Crystal Stilts also played an opening set at the Webster Hall show. Some videos, and a picture of the setlist from the gig, below.... 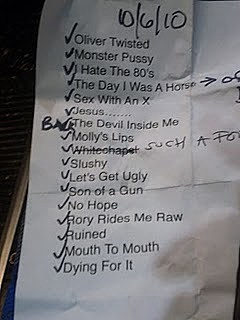