The Velvet Teen in Minneapolis last night (by Grayson Hary) 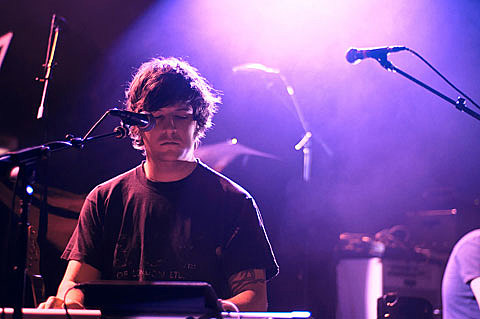 As mentioned, The Velvet Teen will open for Minus the Bear on their Highly Refined Pirates 10th Anniversary tour which hits Chicago's Metro tonight (10/11) and NYC during CMJ at Webster Hall on October 18. Both of those shows are sold out, but The Velvet Teen have just added their own headlining show in Brooklyn at Glasslands on October 17 with Crinkles. Tickets are on sale now.

The Velvet Teen haven't played NYC since their show at Knitting Factory's old Tribeca location in 2007. Since that show, they've joined back up with their old bassist Josh Staples and have been performing as a four piece. They recorded their first batch of material as a four piece, the No Star EP, at the tail-end of last year and released physical copies at the beginning of this year via Side With Us Records. The EP falls somewhere between the progressive noise pop of Cum Laude and the more straightforward emo-y indie rock of the band's earlier work. A video of the EP's title track is below. You can order the EP from the Side With Us webstore. The band also recently made all of their albums available for $5 downloads at their bandcamp.

Speaking of emo-leaning indie rock, Maritime are playing Knitting Factory on Friday (10/14) with Atlantic/Pacific (ex-Texas Is The Reason) and Kid Savant as part of the Royal Flush Festival that Lotion is reuniting for and that reunited punk band Zounds is playing too. Tickets for the Maritime show are on sale now.