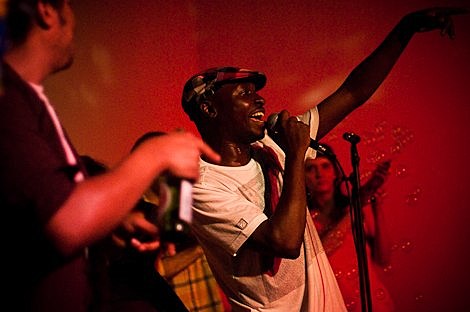 On Tuesday, representatives of the Very Best, an African-British hybrid whose showcase was one of the most highly anticipated of the week, confirmed that the group would not be performing because Esau Mwamwaya, the Malawian singer who performs in the Very Best, "ran into unfortunate travel circumstances." A statement from the band's label, Green Owl, did not explain further but said that Mr. Mwamwaya had an American visa. Green Owl's showcase on Wednesday will go on, however, with Theophilus London and others to be announced, the statement said. [NY Times]

That means The Very Best won't be making their Wednesday night show at LPR or their Thursday in-store at Other Music.

Other international artists forced to cancel appearances at this year's CMJ include Speech Debelle (U.K.) and First Aid Kit (Sweden).

Video from the last time The Very Best played NYC (in July) is below...

The Very Best (Esau Mwamwaya and Radioclit) LIVE in NYC