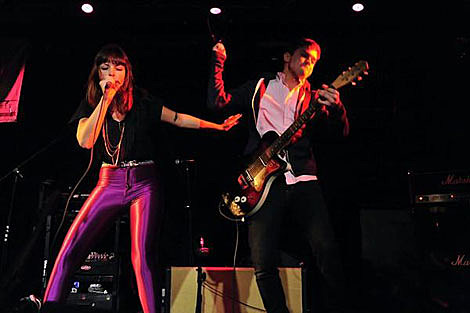 After the Very Best canceled their CMJ appearances in late-October because of travel issues, the band had apparently sorted things out in time for their Halloween show at Brooklyn Masonic Temple. The band wrote: "were super sorry and gutted we had to cancel all the shows so far on the USA tour. we where applying for another visa which took longer than we where told and esau's passport was held. we finally got the passport back and will do the last leg on the tour startin on staurday in new york! sooo sorry and we hope to be back soon and make up for this fuckup."

Despite that, the group performed without singer Esau Mwamwaya at the Brooklyn Halloween show. The only members in attendence were DJ Johan Hugo (aka 1/2 of production team Radioclit) and two of the group's dancers. (Flavorpill, who put on the show, describe the act in their post-show coverage as "The Very Best Sound System.") Other performers on hand for the charity event were Bajah & the Dry Eye Crew, Sub Swara, DJ Kyle Hall, DJ Stretch Armstrong, $mall ¢hange, and VDRK & Bradley D.

Esau did play Boston the following night and will (we hope) be in attendence at their Santos Party House show on Wednesday, November 4th. Tickets are on sale. Sleigh Bells ("electroclash/dancepunk [from] ex-Poison the Well Derek Miller and Alexis Krauss") open.

This will be Sleigh Bells' first post-CMJ show. They left the festival with lots of extra hype. Sheena Beaston wrote, "There's so many great things I coud tell you about their [October 21st] performance [at Santos Party House], which consisted f 5 songs, a guitar on 3, a tmabourine, and an iPod as a backing track. In short, it was one of the best live shows I've seen all year." Stereogum named them a "Band to Watch" one day after that same show. Pitchfork's Ryan Dombal said they were "one of this week's legit breakouts-- just might be the best thing I see all week." Pitchfork then gave their song "Crown on the Ground" "Best New Music" a few days later. Download it above.