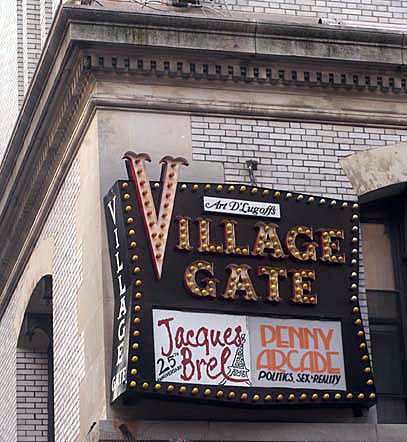 The Village Gate, the historic Bleecker Street club, will reopen next spring. Art D’Lugoff debuted the club in the fifties and closed it in 1993; since then, it’s been leased to tenants. Now, new owners have taken over the space and, with D’Lugoff’s blessing, will revive it as an 800-seat venue called Le Poisson Rouge. (The iconic VILLAGE GATE sign will remain.) “I’m very eager to come back to the Village,” D’Lugoff says. “These kids have got good taste; they’re the right type of people to do what I started years ago—the whole schmear: folk, jazz, blues, everything.” Programmer Ronen Givony, who made his name with the Wordless Music Series, which presents different genres of music on the same bill, wants to do the same thing here. “Everywhere you go, you see an indie-rock band with two or three identical indie-rock bands opening for them,” he says. He plans to offer “African guitar with string quartet one night, a rock band the next.” D’Lugoff likes the sound of that. “This is intelligent stuff,” he says. “It’s not a schlock joint.” [NY Mag]