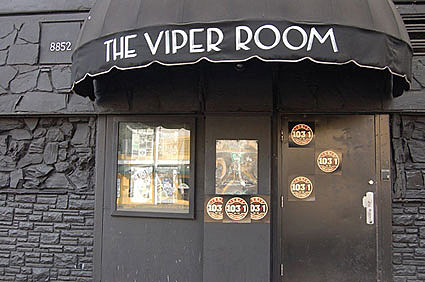 The world famous VIPER ROOM on L.A.'s Sunset Strip has been sold to Harry Morton, entrepreneur and founder of Pink Taco Mexican Restaurants. With his new association with the venue and its brand, he now retains majority of ownership.

"I want to make it real clear that I have no intentions of remaking the brand. If it ain't broke, don't fix it," says Harry Morton. "I plan on maintaining the integrity of the brand while elevating the focus of the music and live entertainment. I'm looking forward to expanding the brand worldwide, while sticking by the core beliefs I maintain at all my companies: staying true to brand, integrity and identity."

Morton, who is also the son of legendary Peter Morton, founder of the Hard Rock Cafés and the Hard Rock Hotel & Casino, Las Vegas, brings with him a team with very strong credentials in the live music business. Arich Berghammer, President of Morton's companies, boasts over 25 years of related experience. Prior to joining the Viper Room, Berghammer functioned as National Chief of Staff as well as National Senior Director of Operations for The House of Blues, responsible for the overall profit and loss for ten entertainment venues nationwide.

Berghammer also served as General Manager for the House of Blues, West Hollywood. During his tenure as General Manager, House of Blues West Hollywood was twice awarded by Pollstar as "Best Live Music Venue Operator in the World for 1500 person capacity." "Harry and I have both agreed that we will not be making ANY changes that compromise the culture or identity of the Viper Room," explains Berghammer.

Current plans for the Viper Room include minor cosmetic changes to the current location on Sunset Blvd. and development of the brand to locations across the nation and around the globe. Expansion plans currently include target cities such as Las Vegas, Miami, Portland, Seattle, New York, London and Tokyo.

About the Viper Room:
Since its stellar opening in 1993, the world-famous Viper Room (also known as Johnny Depp's joint) has hosted the likes of Johnny Cash, Tom Petty, Oasis, Queens of The Stone Age, Courtney Love, Elvis Costello, Pete Yorn, Pearl Jam, The Strokes, Weezer, Maroon 5, John Mayer, Iggy Pop and Sheryl Crow, as well as an array of other internationally established artists and the cult favorites of America's underground. This intimate nightclub, situated in the heart of the world famous Sunset Strip, is styled in the fashion of Harlem's great jazz clubs of the 1920's. On any given day of the year, you'll find musical talents that are developing and leading the music scene of Los Angeles and the nation. It has become the premiere destination to discover emerging local talent. Bands like Shiny Toy Guns, The Vacation, Gram Rabbit, Phantom Planet, Giant Drag, Something For Rockets, The Plebs, Nico Vega, Monsters Are Waiting, The Like, Carina Round, Ringside, Low vs. Diamond, Midnight Movies, The Shore, Katy Perry and Oslo are just a few of the artists who have appeared at the Viper Room early on in their careers. For information on the venue and upcoming shows, visit www.viperroom.com.