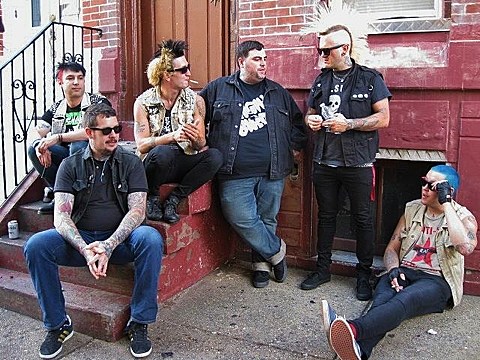 Fresh off of their West Coast tour, Philly street punks The Virus will soon be hitting the road again, accompanied by the complementary Who Killed Spikey Jacket? from Boston. Reformed in 2013 after a nine year break, The Virus' spirited smokers often incite sublime sing-a-longs. Led by the charismatic Mike Virus, also of Cheap Sex, the group continues to balance working-class muscle with anthemic songs that force their themes to stay bottled-up inside your head for days. After a proceeding Boston date, The Virus will infect NYC at The Acheron on June 9. (Tickets.) The bill includes the in-demand Creeping Dose, who are also playing the upcoming EU's Arse show at the same venue, plus other support slots to be announced.

If The Virus have got you in the mood to still fight for a future, the legendary Casualties are definitely worth the expended energy. The 24 year old NYC institution have some shows coming up this year, and though none in their hometown are announced at the moment, they'll be nearby for a Poughkeepsie show on July 11 at The Loft. Tickets for that show are on sale now. All of their dates are listed below.

Core more your score? If you missed Breakdown in its O.G., demo-days incarnation at the 2013 Black n' Blue Bowl (and, heads up, 2014's BNB Bowl is fast approaching), the Yonkers crew has two upcoming concerts on the horizon. The first is June 20 at Saint Vitus, opened by White Widows Pact, Manipulate, and Heavy Chains. (Tickets.) The second comes a day later in Asbury Park, New Jersey, subbing Manipulate for Born Annoying, No One Rules, and Altered Boys.

Speaking of the latter, Altered Boys' May 24 is looking busy. Not only will they be appearing at the Violent Reaction show at The Acheron, but they're included on a matinee bill that same Saturday at Saint Vitus with Left for Dead and Jukai. (Tickets.) Hey, if you're going to play one show, you might as well make a day of it, right? Still, to prove their van skills aren't rusty, the Boys will shoot out to sunny California in the beginning of June. Their dates are listed below.

UK crust vets Extinction of Mankind recently announced a North American tour, and though the venue was still TBA when we first posted, we now know the NYC show will be at Acheron on May 29. The rest of the bill includes Aspects of War, Trenchgrinder and The Brood. Tickets for that show are on sale now.

Another hardcore band (and Black & Blue Bowl alumni) DYS, one of the many bands of Dave Smalley (Down By Law, All, Dag Nasty), are playing a Long Island one-off on May 25 at Even Flow with Live Fast Die Fast, Gutterlife, The Muckrakers and No Control. All (though not with Smalley) are also confirmed for this year's Riot Fests in Denver and Chicago.

Another punk band (who have more in common with All than DYS), The Queers, have scheduled a few shows with Italy's The Manges, including a small one in NYC happening on June 4 at Grand Victory. Tickets for that show are on sale now. All dates are listed below.

And last but not least, a much different kind of punk (but no doubt a legend), Cheetah Chrome of the pioneering Dead Boys and Rocket from the Tombs, will play a free NYC show on Saturday (5/17) at The Delancey with The Nuclears. Cheetah will be joined by Paul Burch for his set. They go on at 10 PM. Cheetah and Paul also play another free show the next night at The Treehouse at 2A (25 Ave A) with Kevn Kinney (of Drivin' N' Cryin'), Bethany Saint-Smith & The Gun Show and Cariad Harmon.

All lists of dates, with some song streams, below...