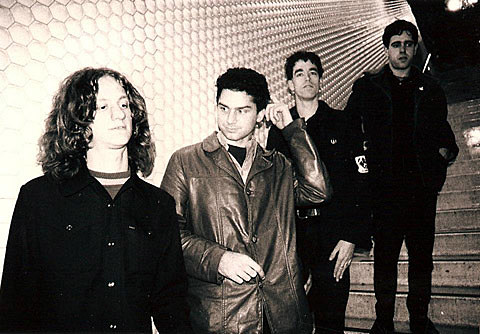 "The VSS began in Boulder, Colorado in January 1995 and ended unceremoniously in July 1997. In that time the band relocated to San Francisco, toured the U.S. twice and Europe/UK once, released a series of 7-inch EPs and issued Nervous Circuits, its only full length album. It was recorded and mixed over the course of one week of sessions (usually lasting upwards of 16-hours per day) in October 1996 at the same Denver studio in which The VSS recorded its debut EP... To this day, The VSS is commonly known for two things, 1) its inventive use of horror-film keyboards, angular guitar, unusual rhythmic shifts and vocal effects in creating a dark, jarring sound that merged punk, goth, psychedelia and experimental rock, and 2) its "crazy" light show, an unprecedented notion for the underground basement show set."

The VSS have announced their intention to play a batch of reunion shows in celebration of the release of Nervous Circuits on vinyl and a forthcoming compilation LP that collects their previous 7" material. So far no word on dates, cities, etc, but we'll keep you informed.

Nervous Circuits was originally released on Honey Bear Records in 1997 and subsequently reissued via Hydra Head in 2008. Members of The VSS went on to join bands like Pleasure Forever, Red Sparowes, and Rabbits.

Check out some video of The VSS in action, along with a stream of some tracks from Nervous Circuits below.

The VSS - I Cut My Teeth