The Walkmen at Terminal 5 in 2012 (more by Gretchen Robinette) 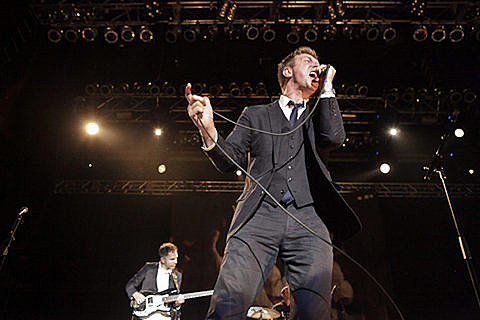 Bassist/organist Peter Bauer of The Walkmen revealed in an interview with the Washington Post that the band is going on an "extreme hiatus" after their upcoming show in Philly this week. He continues...

"We really just have no idea," Bauer says. "I don't think any of us wanted to write another Walkmen record. Maybe that will change down the line, maybe it won't, maybe we'll play shows. I think it's weird to make a hubbub about something if there's nothing to really make a hubbub about. At the same time, I don't think we've been a gang properly for a long time, so there's not much to break up, I guess."

"When we play shows it's a really fun time seeing old friends," Bauer says. "It's not the archetypal rock band where everyone lives in an apartment. We all live in different cities and we call each other occasionally. It's like going to Thanksgiving."

"I think it's cool that we're all still pals and all," Bauer says. "It's nice to be removed from [being a band] and to be friends, or something like that, and to see what happens from there.

The band's Philly show happens on Wednesday (12/4) at Union Transfer and is a fundraiser for Rail Park which also features Sun Ra Arkestra, Sharon Van Etten, Spank Rock, Birdie Busch, Light Heat, Chris Ward, Mary Lattimore and Jeff Zeigler. Tickets for what may be the band's final show for a long time are available.

The members will remain active musicians though, and a few have solo albums planned. Frontman Hamilton Leithauser is prepping a solo album which is due out in 2014 and will feature contributions from his Walkmen bandmate Paul Maroon, plus Rostam Batmanglij (Vampire Weekend), Richard Swift (The Shins), and Morgan Henderson (Fleet Foxes, Cave Singers, Blood Brothers). Peter Bauer is also releasing one called Liberation! under the name Peter Matthew Bauer (and it also features other Walkmen members), and Walter Martin is planning one too.