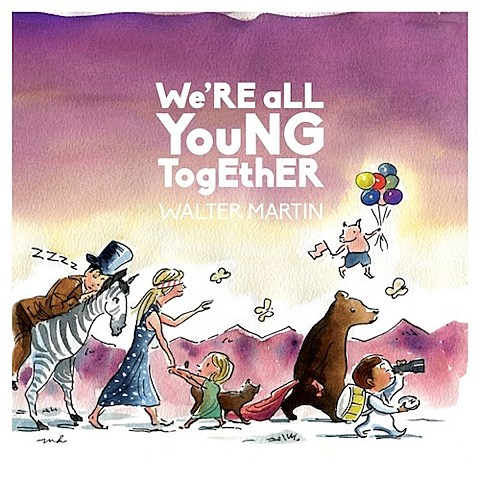 As discussed, Walter Martin is one of the many Walkmen who are using the band's hiatus to dive into solo career territory, and his guest-filled debut LP, We're All Young Together, is coming out on May 13 via Family Jukebox. It's an album for children, but not "kids music." Since we last spoke, he released a live video of one of its tracks, "The Beatles (When Ringo Shook His Mop)," which features contributions from Walkmen singer Hamilton Leithauser, Caveman singer Matt Iwanusa, and Nick Stumpf & Josh Wise (both of French Kicks) on the studio version. You can check that out below. If you pre-order the album on iTunes, you get an instant download of "Sing To Me," which features Karen O. Walter also revealed the album artwork (above), and full tracklist (below).

He's got two NYC appearances scheduled at the moment too, including a "special collaboration" with Wesley Stace (who has other dates) at Housing Works on March 28. That starts at 7 PM, and will also feature Walter discussing the album with author Sam Lipyste (The Fun Parts). He'll also play a full band release show at Joe's Pub on May 16. Tickets for that show are on sale now.

Joe's Pub is also where Hamilton Leithauser plays four shows in April. Tickets to some of them are still available.

The Walkmen's Peter Matthew Bauer also has upcoming dates, including a NYC show on Thursday (3/6) at Baby's All Right (tickets).

Walter Martin - "The Beatles (When Ringo Shook His Mop)"