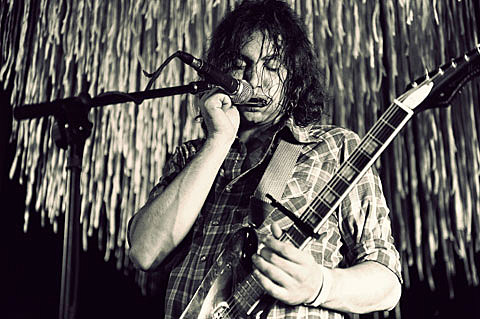 The War on Drugs have been working on the follow-up to their acclaimed 2011 album, Slave Ambient. Main man Adam Granduciel updated folks over the summer on the album's progress:

i've been working on the new drugs record since around last September, and demos actually began in April and May of last year. So far Dave has played a fretless bass on 2 songs and Robbie made an Arp Solina sound like the wind. So far we've tracked stuff all over the place-my home studio, my main engineer Jeff Zeigler's Uniform Studios in philly, Water Music in Hoboken (Sandy hit them pretty hard and they've done an incredible job of rebuilding and moving forward stronger than before), Mitch Easter's Fidelitorium in Kernersville, NC (although Mitch wasn't involved in the sessions and i was in the shower when he stopped by to drop off a 12 string Hagstrom), Miner St. studios in philly, my most favorite spot, Echo Mountain in Asheville, NC...and most recently, last night in brooklyn at 'the bunker,' where my friends Jon Natchez and Kelly Pratt played some beautiful horns on a bunch of songs. They're currently in town rehearsing for their summer tour with David Byrne and St. Vincent (uhhh...super sick) so why not get the best.

While there's been no official details on the new LP -- like title or release date -- that might not be too far off, as The War on Drugs have just announced two NYC shows: Bowery Ballroom on March 20 and Music Hall of Williamsburg on March 21. Tickets for both shows go on sale Wednesday (12/4) at 10 AM. Those are the band's only scheduled tour dates at the moment.