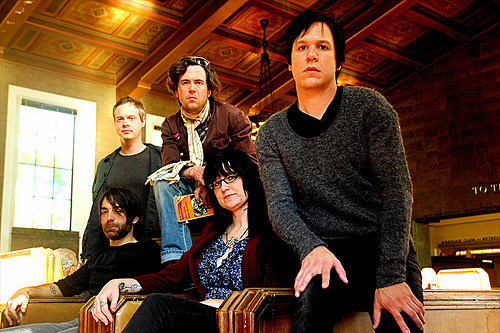 With a decade of recording and touring about to be in their rearview mirror, The Warlocks are set to embark on a UK tour before hopping the pond back to their native California for the start of a US tour on July 30th with The Morning After Girls. Along the way, look for the band to hit up the NYC area twice Bowery Ballroom on Aug 14th and Maxwell's on Aug 15th. Tickets for Maxwell's are already on sale, while Bowery's tix are currently on AMEX Presale with regular sale going down at noon on 6/19.

The Warlocks' new drug-hazy and shoegazey pantheon to psychedelia, The Mirror Explodes, is out NOW on Tee Pee. Check out a pair of MP3s from that record above and the uber-trippy video for "Red Camera" below. The band was recently interviewed by The Skinny.

The Morning After Girls last played NYC over Memorial Day Weekend with A Place To Bury Strangers and Holy Fuck (as well as a private, intimate show at the Living Room on May 31st). They also played an EP release show at Santos in April. Their debut LP, "Alone", is out July 7th.

All tour dates and a video below...