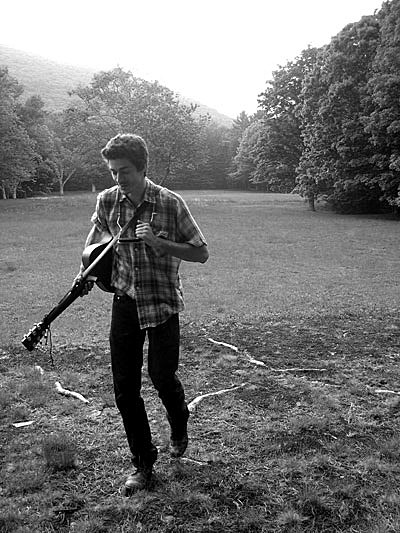 Last time AA Bondy played NYC was also the first time I ever saw him play live. It was late on a Friday night, the sold out Mercury Lounge was fully packed with drinking patrons, and the Felice Brothers were coming on next - not the best conditions for a solitary man on stage by himself with just a microphone and his acoustic guitar.

As was to be expected, there was lots of talking and it made it hard to pay attention at first. His wife Claire Felice (who also took the above photo of him) joined him on keyboards, and that helped a little, but not enough. Then in walked a drummer, and not just any drummer - it was Russell Simmins of Jon Spencer Blues Explosion (and Tiny Masters of Today) fame - and that was just the magic ingredient the music needed to turn things into a proper Friday night rock show. The drums helped bring the beautiful songs off "American Hearts" (which is being re-released by Fat Possum) alive, and kept all eyes focused on the front of the room while simultaneously keeping mouths shut (or at least drowning them out).

AA plays again this Wednesday night (March 12) at the BrooklynVegan official showcase at Club De Ville in Austin. I can't wait to see him again, and I'm equally stoked that The Weakerthans chose him to accompany them and Christine Fellows on tour this spring. Tickets are still on sale for the April 11th show at Music Hall of Williamsburg (the same night AA plays Conan O'Brien). All tour dates below.....