The Wedding Present @ Bowery Ballroom in 2008 (more by Tim Griffin) 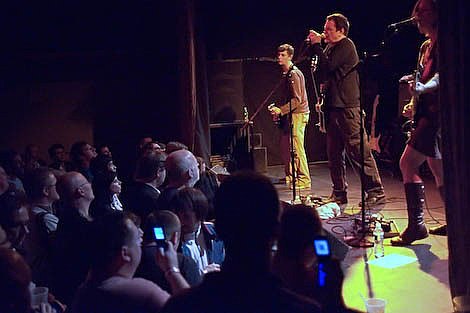 The Wedding Present will be playing their 1989 album Bizarro in full on an upcoming North American tour in celebration of the record's 21st anniversary, including an April 10th show at Maxwell's (tickets on sale Wednesday at noon) and an April 11 stop at Bowery Ballroom (tickets on sale Friday at noon). All dates below.

Bizarro was most Americans' introduction to The Wedding Present's jangle-on-speed sound, as it was their first to get released in this country, and was also their major label debut (RCA). (It's also the first place anyone ever heard a Pavement song -- their cover of "Box Elder" was a bonus track on the American CD.) While the album's singles, "Brassneck" and "Kennedy", have remained constants in The Wedding Present's live cannon, this tour will surely mark the first time some of Bizarro's songs been played live in the States since 1990, if ever. As to why frontman (and sole remaining founding member) David Gedge chose to celebrate 21 years, not 20, is anybody's guess but if nothing else I'm looking forward to hearing the album's nine-minute epic "Take Me." And we can only hope this will lead to them doing the same for their 1991 masterpiece, Seamonsters. And maybe they'll do it on the 20th anniversary.

The Bizarro tour will also hit Japan and Europe later in the year, but most of those shows are still TBD. All announced dates, plus some videos from the time of the album, below...