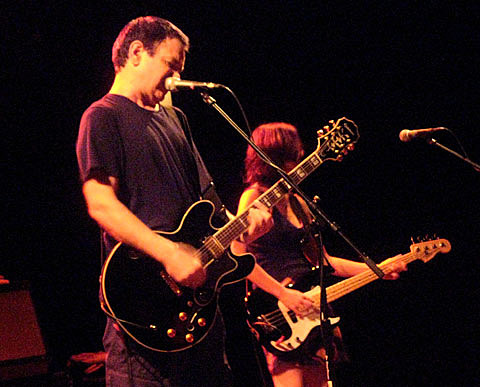 If you missed The Wedding Present performing their classic 1989 album Bizarro at Bowery Ballroom in April, you've got another chance to see these British indie rock legends in NYC -- they'll be playing Pier 17 at the South Street Seaport on August 13. it is part of the Seaport Music Festival series presented by the River to River Festival. No opener has been announced yet.

The Wedding Present were fantastic at Bowery, playing Bizarro with all the manic, string-destroying energy it had 20 years ago. They also played a warm up set of new and classic, non-Bizarro songs. There's video at the bottom of this post of them tearing through the eight-minute epic "Take Me!" from the Bowery Show.

That looks to be the last of the shows at the Seaport which will play host to such bands as Bear in Heaven, Thee Oh Sees, Avi Buffalo, Yacht, Best Coast and Free Energy before then. The first show in the Seaport Music series is Saturday, June 26 with the Apples in Stereo being joined by the Brooklyn Youth Chorus and members of the Brooklyn Philharmonic.

Tuesday, June 15th, at the Seaport, Paper Magazine is presenting Drake, Hanson and Ninjasonic. That will be bananas.

And while on the subject, Ribbons play my Sound Bites Lunchtime Series, also at the Seaport, this Wednesday at 1PM.

Full Seaport Music Festival schedule, and that live Wedding Present video are after the jump.

The Wedding Present performs Take Me! at the Bowery Ballroom, 4/11/10 from BlearyEyedBrooklyn.com on Vimeo.