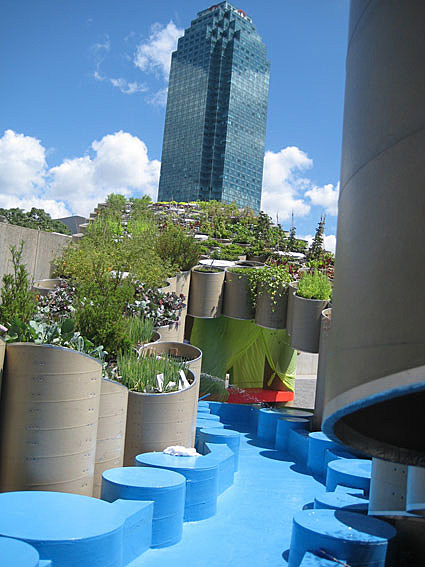 Friday night I went to APT to see Joakim deejay. I hadn't been there in almost a year and arrived just a hair too early for a Friday night. Todd Sines was on when I got there. His set was fine, but not what I was in the mood for. Jaokim went on about an hour later. Overall a bit too mellow so I left early, but there were highlights, like Mr. Oizo's remix of "Le Magicien D'os" by Ark and a great remix of Simian Mobile Disco's "Hotdog" that I hadn't heard before.

Saturday I went to PS1 around to see Op:L Bastards. It was much less crowded than usual at 4:00 when I got there. For the first time in three summers of going to Warm Up, I saw my first ever empty (except for a generous estimate of maybe 10 people) dancefloor. DJ Poodlecannon was finishing an interesting mix of world music and dance music when I got there, but wasn't really mixing the tracks together. There were a handful of people hitting the floor hard. Everyone else was politely tapping one foot or paying absolutely no attention. Thankfully Op:L Bastards went on promptly at 5:00.

I wasn't the only one waiting around for them. Several people approached the floor as they began. Eventually the dance floor was 3/4 full. Op:L Bastards is essentially a 3-man, live electronic band with a guitarist, bassist, and vocalist who also twiddles with a lot of electronic elements. Things started off a bit slow, but a few songs in they played "Scorpius" which really banged as did every track that followed. I think they were playing a lot of music from their album The Job which originally came out in 2001. It was a nice change as it didn't really sound like anything that's come out recently, but didn't sound dated either. The album was actually just re-released last year with 4 bonus tracks and a forward by Philip Oakley of Human League.

Speaking of Human League, I'm really excited to see Soulwax again in October, but let's not skip ahead. Here's what's going on Wednesday (Aug 27) and Thursday....

Girls & Boys is happening at Arlo & Esme (42 E. 1st St. btwn 1st and 2nd Ave). If you haven't been there before it's a nice little place with more of a bar feel vs. a club. The main floor area isn't all that big, so it gets full and moving pretty quickly and there are lots of other little rooms and areas to hang out if you don't feel like dancing. This week it's the Official Does It Offend You, Yeah? afterparty with AC Slater and Cobra Krames deejaying. As always there is no cover. 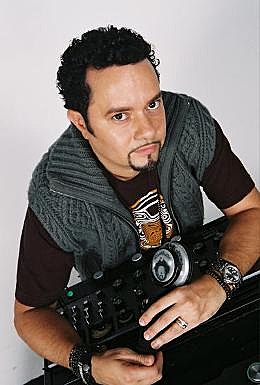 One last option for Wednesday - legendary deejay and producer Louie Vega (Vega Records) is at Cielo. While his music has soulful house leanings, his influences are eclectic which should make for an equally interesting set. 11pm-4am, $15 at the door.

Thursday night (Aug 27) French house legend Alan Braxe is deejaying at Santos. I have to say, I've seen Alan deejay twice in the past year and it hasn't been the mind-blowing French house explosion I've anticipated it to be. It's hard to tell yourself not to see someone who is partially responsible for such great tracks like "Intro", "Rubicon", "Vertigo", and "Music Sounds Better with You" not to mention tons of great remixes. Hopefully third time's a charm.

NY-based electronic pop/rock band 33hz play highly danceable, retro-tinged (along the lines of Prince and Michael Jackson) original tracks live at midnight. Their new single I Feel Alive b/w Sentinel of Love is due out on October 4th, via the Fluokids-affiliated Foolhouse Records.Fluo Kids' electronic music blogger Pharrell will also be deejaying at Thursday's party. 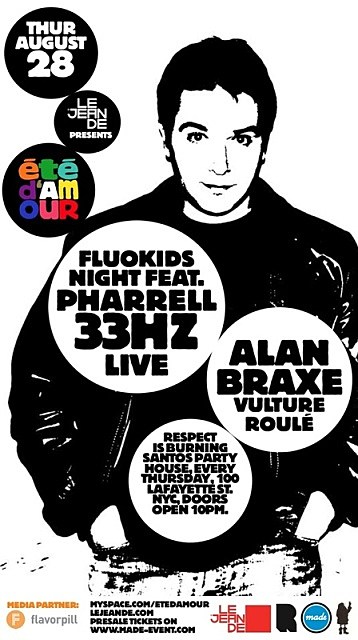 If you're looking for something more rock/punk oriented but still dancey, Radio 4 is at Fontana's: 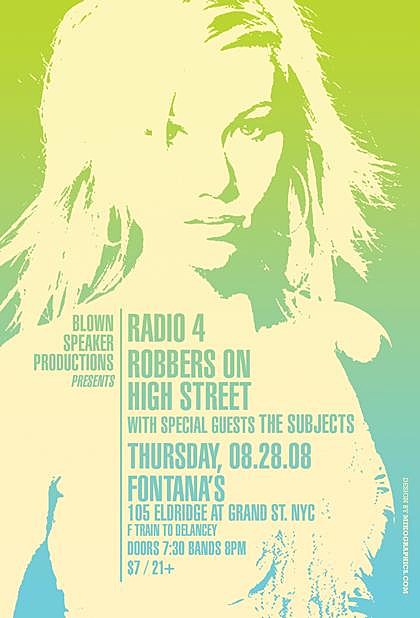 That's it for now. The weekend in dance will be up in the next couple of days...