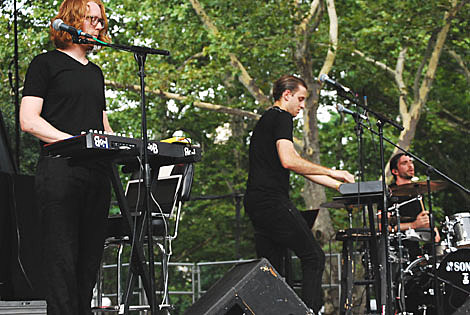 Last week in dance was great, more specifically Saturday. Unfortunately I missed Canyons at Dark Disco in the Park, but arrived just in time for Drop the Lime's live set, which was amazing. As much as I first loved the heavy bass champion's sound when I first started seeing him deejay back in '07, lately his (and the other Trouble & Bass deejays') sets have been a little too bass-heavy for me (I think I'm getting old!). However, the live set on Saturday was the perfect balance of heavy bass, awesome live drums, and great vocals. There is something about adding live elements to dance music that just can't be touched, and Drop the Lime's live act is no exception. I was in an excellent mood after Drop the Lime's set and it only got better as Boys Noize took the stage. From the get-go it was clear that it was going to be a great set. It included loads of new tracks and any predictability I had witnessed in some of his prior sets was gone. Check out some video of Boys Noize dropping one of his & Erol Alkan's new tracks "Waves" below:

While there aren't any discos in the park this week, there is still plenty going on dance-wise, starting with Thursday (8/13):

As I mentioned at the end of last week's post the excellent British trio, Friendly Fires will be playing their final US date of this tour at Music Hall of Williamsburg. It's been sold out for a while now, but you can still try to get tickets.

Another event that might already be sold out is the People Don't Dance No More boat party. If it's not, you can get an advanced ticket to disco on the high seas with David Bruno, Robot Blair, and special guests Canyons, Jacques Renault, and Justin Miller, here, or at the dock if there are any left ($25). Also, check out a mix from Justin at the top of this post. The tracklisting and party info is below: Also on Thursday (8/13):
- Den of Thieves party at Stay
- DJ Spinna deejays downstairs at Santos.
- Jesse Mann is the guest deejay at this week's Ether party at Happy Ending.

Friday night (8/14) Flashing Lights is back, this time at the excellent dim sum by day, dance spot by night - 88 Palace. It's Flashing Lights' co-founder, Jubilee's bday, plus she'll be doing a tag team set with Udachi to celebrate the release of their new single "Paypur / Smoke Rings" on Nightshifters. Fellow Flashing Lights crew members Ayres & Nick Catchdubs will be there, along with special guest deejays Toadally Krossed Out making their New York debut, which you definitely won't want to miss if you're a fan of Mad Decent.

If you're looking for something more disco-oriented, People Don't Dance No More will be partying for a second night in a row! Get your feet back on solid ground after their Thursday night boat party, this Friday (8/14) at Trophy Bar. Bruno and Blair will be there of course, plus special guest Schmami bringing some spacey disco all the way from Helsinki. Download his Eurolax mix at the top of this post. Tracklisting and party info below: 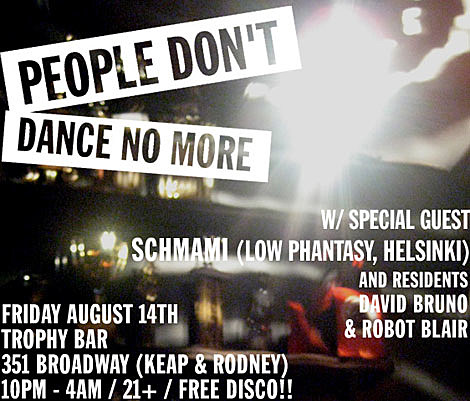 GBH continues bringing the electro Friday after Friday at Webster Hall with their Girls & Boys party. This week they've brought in the consistently awesome LA Riots plus Designer Drugs, and DJ Berrie: 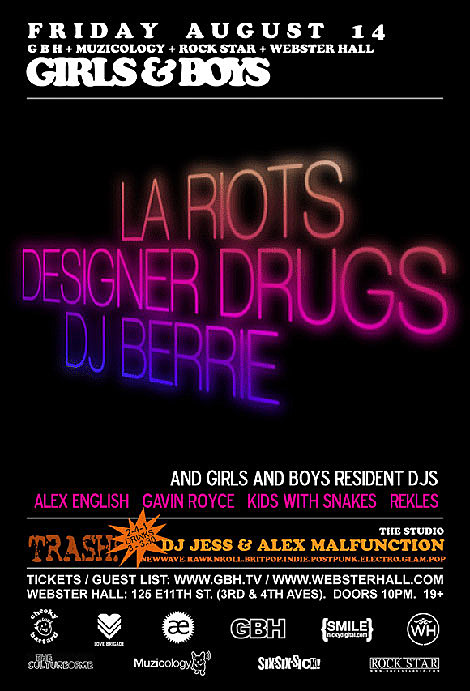 Advanced tickets available here and we have 1 pair of tickets to give away! TO WIN A PAIR OF TICKETS TO SEE LA RIOTS, DESIGNER DRUGS, AND DJ BERRIE AT WEBSTER HALL ON FRIDAY (8/14) email BVCONTESTS@HOTMAIL.COM (subject: LA RIOTS). Include your first and last name. 1 winner will be chosen at random and contacted.

Also on Friday (8/14):
- Hercules & Love Affair are at the Gramercy Theatre for the first of 2 NYC shows (tix) (House of House and Liv Spencer are opening). The second show is the following night at Music Hall of Williamsburg (tix).

- School of Seven Bells at the Seaport Music Festival/Pier 17
- Turntables on the Hudson is happening every Friday at Water Taxi Beach.

As usual there is even more great dance music headed our way this weekend, but before that happens I just want to remind you that Friday night, at midnight, prices increase for the Electric Zoo festival, happening on Randall's Island on September 5th & 6th (Labor Day weekend). I'm not sure how much prices will increase, but right now general admission is $60 per day, or $110 for a 2-day pass (VIP is $130 single day, $245 2-day). Tickets and full info on the festival is available here and be sure to check back for Part 2 of the Week In Dance!