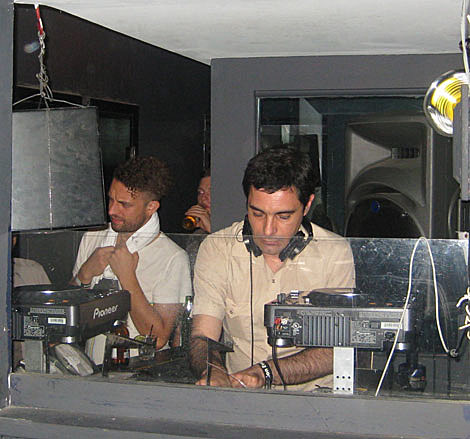 It's been an interesting week in dance so far. Tuesday night Pilooski was great, as expected, at the Scion party at Plan B. Unfortunately nearly everyone there was in "hang out & BS" mode instead of dancing. At any given time there was probably a maximum of 5 people dancing which was frustrating. You can lead a horse to water...I had an excellent time anyway and hopefully people will dance more when Pilooski is back here on September 26 (location tba).

Wednesday night at Le Poisson Rouge was the complete opposite. The Phenomenal Hand Clap Band opened for Friendly Fires and there was a pretty good amount of dancing going on during their set. Their sound is kind of like a blend of classic rock with hints of funk & soul which I'm not sure how I feel about yet. They were super enthusiastic and fun to watch though.

Unfortunately, immediately after their set, things started to go downhill. Set-up and sound check for Friendly Fires was over an hour and I was standing next to a very drunk & annoying girl (not to be confused with the one at Thursday's show) and matching friend. Despite the extensive set-up, when Friendly Fires finally started the sound was not great! The vocals sounded off to begin with and lead vocalist Ed McFarlane's habit of intermittently pulling the mic away from his mouth as he sings (which usually is not a problem) sounded like a cd skipping at times because the band was so loud. The band's addition of a little horn section to the mix was interesting at first, but ultimately seemed unnecessary most of the time. Removed from these couple of things everything else was typically awesome Friendly Fires. Everyone was dancing away, but I couldn't really get into it after the hour+ wait.

Hopefully things will be better this Saturday (8/15), but before we get into that...last Saturday was the Brooklyn Electronic Music Festival (BEMF). This was my first time going to the festival, which is now in its second year. Heading there after Dark Disco in the Park, I arrived at the Old American Can Factory around 8 to see a decent-sized crowd hanging out in the courtyard. There was a nice set-up of food vendors in the back, opposite the main stage, a bar down a little alleyway, and a second stage indoors. Nobody was really dancing when I got there as Jupiter One's set had just ended, but within a few minutes that changed when OCD Automatic went on, playing a nice little mix of some electro favorites (like Mylo, which I haven't heard out in ages).

At this point I was still exploring the space and getting my bearings...when I went inside and saw Plant Music's Kap10Kurt was on I was really excited as I've come very close but have never actually succeeded in seeing one of his sets. Unfortunately this time was no different since he was done by the time I figured out the bar/drink tickets situation and got back to the stage.

Young Love (who I've seen before and am not a fan of) was on the main stage and I was beginning to realize that forgetting to print out the schedule of performers was not the best move. I spent most of the night scurrying inside and outside to see who was on and hit a lull pretty early on where I didn't like the acts on either stage for a while.

Thankfully around 10, Free Blood (who I had never seen before) went on. I really enjoyed the live guitar over the electronics in the background and Madeline and John have a really good dynamic.

From there things really heated up. JDH & Dave P were deejaying when Shy Child soundchecked over them pretty loudly (which I thought was really rude at first, until I realized that's how pretty much everyone was doing it the entire night). Thankfully JDH & Dave P were able to resume where they left off after Shy Child's set, bringing the packed courtyard's dancing to a frenzied pace by the time the Juan Maclean went on.

At that point I was exhausted and wasn't really looking forward to their set, since the last time I saw the Juan Maclean back in October I did not enjoy their performance at all. The only reason I stuck around was to see how the show would compare to that performance. As soon as they began I was glad I decided to stay.

From the get-go I could tell it was going to be a totally different show. All the somber, underwhelming slow disco jams were gone, and Nancy Whang wasn't straining her vocals this time. Juan and the band played track after upbeat track including newer ones like "One Day" and "Happy House" (which you can see videos of, along with the Juan Maclean tour dates here) and oldies but goodies like "Give Me Every Little Thing". The whole set was very lively & bouncy and everything sounded great (from the synths to the drums to...the theramin) as the modern disco's vibes permeated the crowd. The crowd was accordingly losing it, and it was the most wild Juan Maclean show I have ever been to. It was a great ending to BEMF (for me...the festival went on for hours more, but I was done for the night).

This weekend there is no rain in sight and there are plenty of opportunities to dance outside! Make the most of this good weather (though there are some indoor events too), starting with Saturday (8/15):

There are two special parties of a disco nature happening on Saturday. Earlier in the day Wurst will be hosting a BBQ at the BKLYN Yard. The line-up is a great mix of both Wurst deejays (My Cousin Roy, Brennan Green, and Runaway) and live bands (the Phenomenal Handclap Band, Tanlines, and Q&A):

From there you can continue disco-ing into the night at Market Hotel where Galaxie is hosting a monster disco line-up of its own: 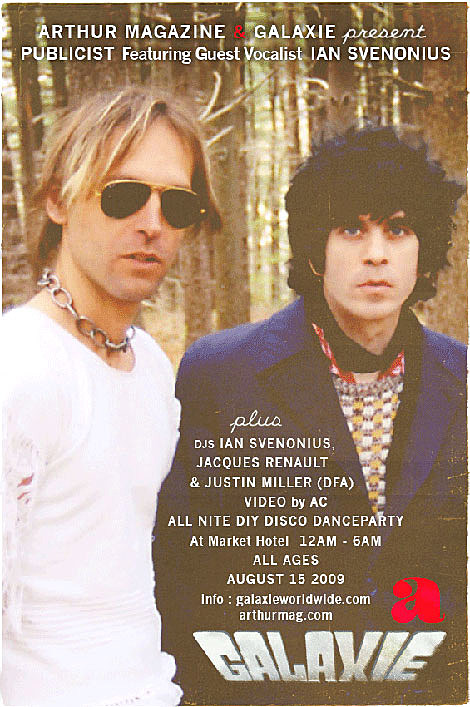 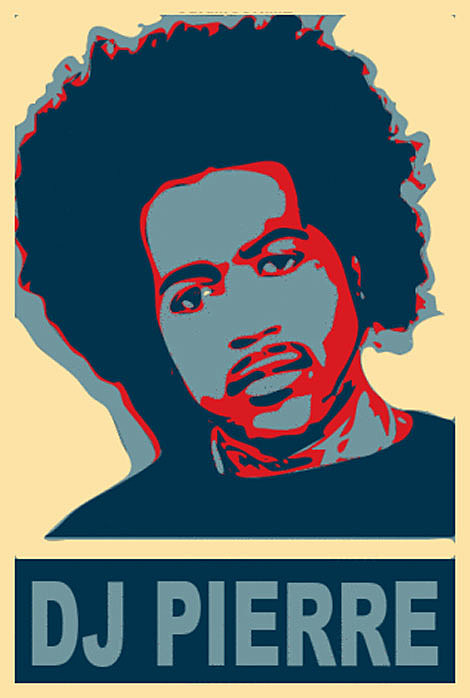 Long Island City's weekly wonders, Warm Up and the Beach party continue on. Warm Up features one of their better line-ups of the season with acid house pioneer, DJ Pierre. More info on Warm Up, DJ Pierre, and the rest of Saturday's line-up (Phuture 303, House of Stank, and Growing) can be found here. 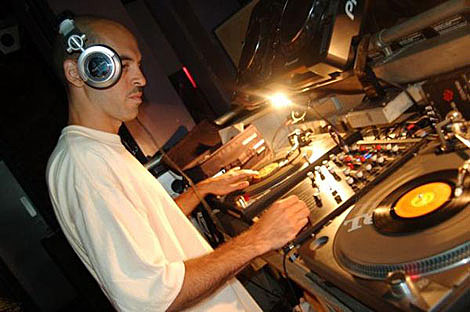 After Warm Up, head to the Beach Party at Water Taxi Beach where New York's own Bobbito Garcia will be spinning one of his super varied and energetic sets:

Also on Saturday (8/15):
- Dam Funk is at APT.
- Hercules & Love Affair are at Music Hall of Williamsburg (tix). They are also deejaying GBH's party at the Tribeca Grand afterward, which also features a live set from Woodhands.
- Nicky Siano deejays Water Taxi Beach at the South Street Seaport every Saturday night.
- Sound Liberation Festival at Littlefield
- Sound Noir at a Brooklyn warehouse.

Last Sunday I broke my habit of going to Sunday Best and Été d'Amour, to check out Simian Mobile Disco at my first Pool Party. Despite it being really muggy and unpleasant weather-wise, the crowd was having an excellent time, really getting down, during both Finger on the Pulse (who also played BEMF after I left the night before)'s opening set (which you can download here) and Simian Mobile Disco's. While SMD's set on Sunday was a bit deeper and more techy than I expected, it was still really good. The good vibes continued all the way to Brooklyn Bowl, where the official afterparties are happening - 2 hours of free tequila, great food (try the jalepeno poppers!) and house deejays playing fun, lively mixes of current electro, and old pop favorites. This week Brooklyn disco duoHoly Ghost will be there. Info below: 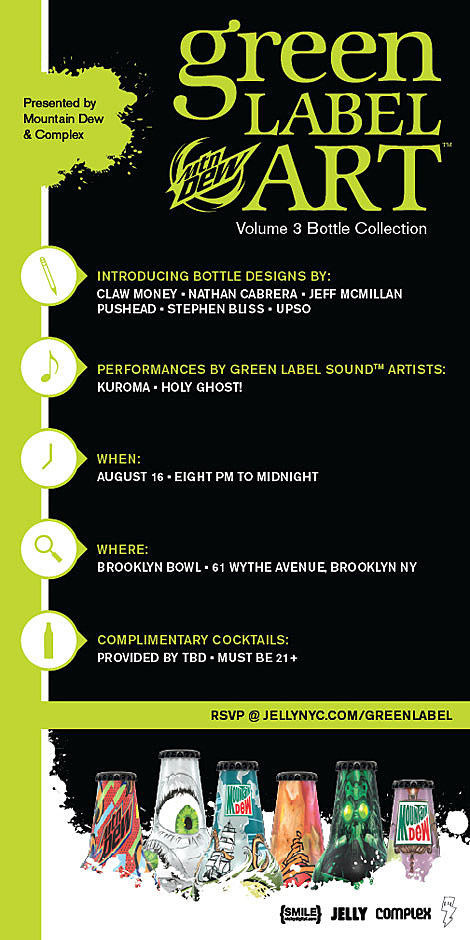 Despite missing them last week, I still strongly recommend two of my favorite Sunday dance parties for this week: Sunday Best and Été d'Amour.

From the looks of things (video below) Motor City Drum Ensemble really had the crowd going at Sunday Best at the BKLYN Yard last weekend:

You can download MCDE's set over on the Sunday Best website if you missed it. While he was in New York, he also deejayed Beats In Space on Tuesday. You can download that set here along with one from BIS host, Tim Sweeney, who is this week's special guest at Sunday Best. Full info on the party below:

This week Été d'Amour is bringing in some local deejays (Max Pask, Justin Miller, andJames F!@.$%^ Friedman) to to drop some modern disco and who knows what else in the Rivington Hotel penthouse. Full info below: 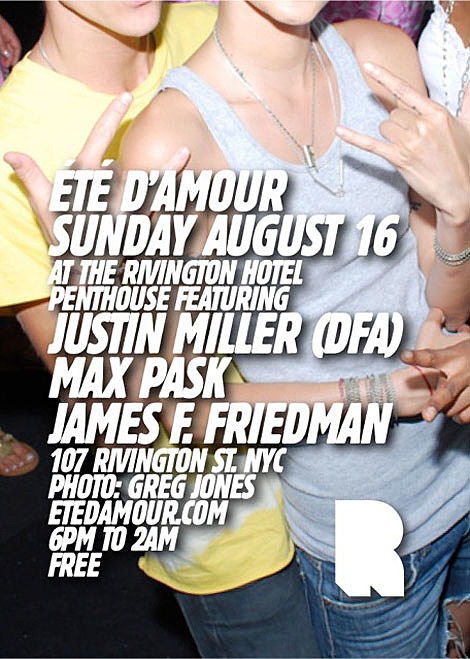 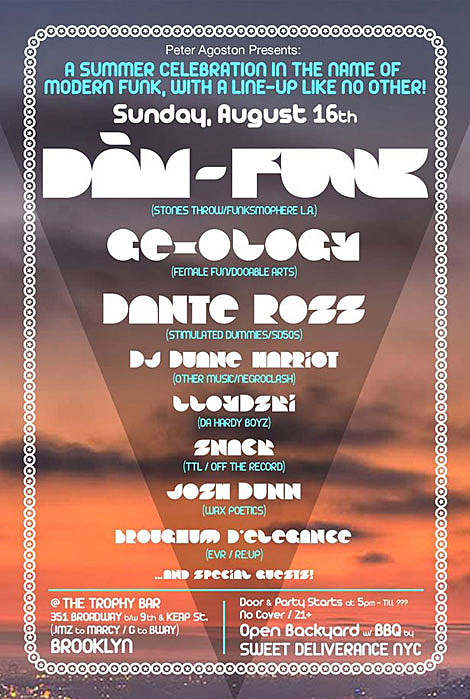 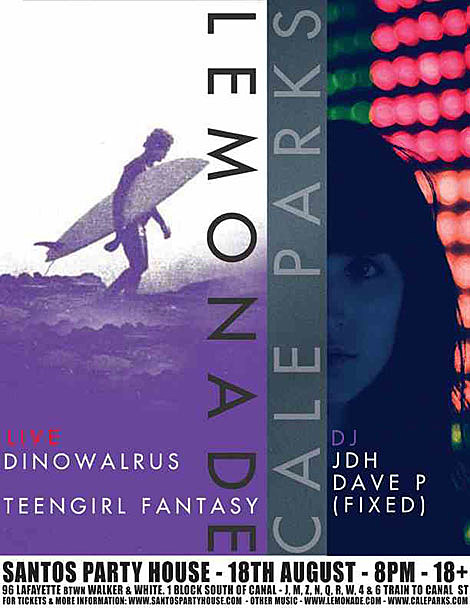