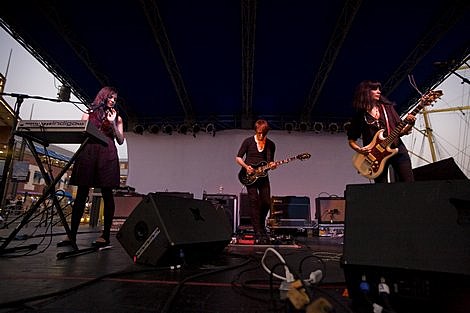 Somehow I didn't go out last week, except for Pilooski and Friendly Fires on Tuesday & Wednesday which I already told you about. Plenty of other dance events went on though...the School of Seven Bells show at the Seaport (above), the DFA Boat Party, Flashing Lights, and Girls & Boys. Now, on to this week:

Meanred's Tonight We Ride party is back again at Santos. Guest deejays include New York's own Star Eyes (who released her Disappear EP earlier this summer, video below) and Jubilee (whose Paypur/Smoke Rings EP is out September 8th on Nightshifters), plus Jokers of the Scene are in from Ottawa. The Canadian duo (who were awesome when they were here back in April) remixed both the Acid Girls' "The Numbers Song" and Burns' "Turbo" (check out the video below) this month, as well as Mika's "We Are Golden" which you can download over at RCRD LBL. Party info and videos below:

Also on Thursday (8/20):
- Danny Krivit and DJ Severe at Cielo (which has reopened after being closed the past few weeks for renovations).
- Ether happens weekly at Happy Ending.
- Less with Connie at Bar 13.
- DJ Spinna deejays downstairs at Santos.

Two great party starters, Fixed and Trouble & Bass, join forces, bringing what is sure to be a great party with Boy 8-Bit to Public Assembly. His set at 88 Palace back in November is still fresh in my mind as one of the most fun sets I witnessed in 2008 (not to mention one of my Best of 2008 right behind the first time I saw him at Glasslands in March). Download the radio edit of his new track "Baltic Pine" (from the Baltic Pine EP out now on This Is Music) from RCRD LBL and head to the party! Highly recommended! 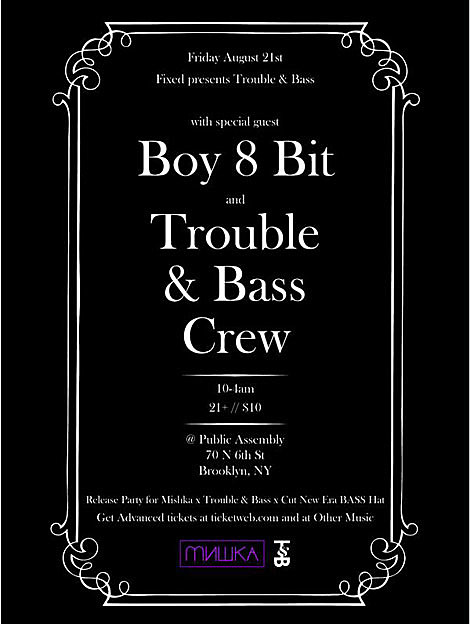 Another option for Friday (8/21) is Boys & Girls at Webster Hall where Does It Offend You, Yeah? will be deejaying (which I've heard is actually better than their live shows) as well as Teenage Bad Girl. Check out some videos from each of them below along with all the party info and a chance to win a pair of tickets to the event!

Does If Offend You, Yeah? - Dawn of the Dead 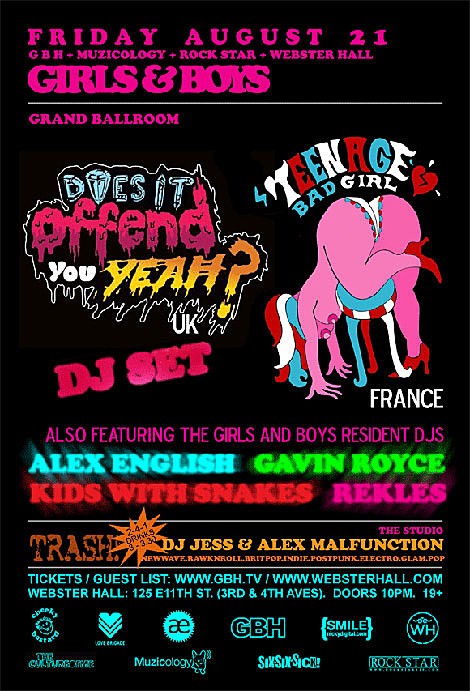 Advanced tickets available here and we have 1 pair of tickets to give away! TO WIN A PAIR OF TICKETS TO SEE DOES IT OFFEND YOU, YEAH? & TEENAGE BAD GIRL AT WEBSTER HALL ON FRIDAY (8/21) email BVCONTESTS@HOTMAIL.COM (subject: DIOYY). Include your first and last name. 1 winner will be chosen at random and contacted.

Also on Friday (8/21):
- Rong Music at Trophy Bar.
- BLK Market at a secret location.
- Our Time at Cameo (in the back of The Lovin' Cup).
- Dub War at Love
- Senari & Teenwolf Present at Le Poisson Rouge.
- Marques Wyatt at Cielo
- Turntables on the Hudson is happening every Friday at Water Taxi Beach.

Be sure to check back for Part 2 of the Week In Dance for info on even more ways get down this weekend...